Who's Who Behind Attacks - or "Reform" - of Public Education

For as long as I've been paying attention, public education has been one of the primary concerns of the voting public, and it has been an endless source of "reform movements." Starting with A Nation at Risk in 1983, and continuing through the turn of the century with No Child Left Behind, Americans have perceived problems in need of serious reform in the nation's public schools. The movement behind Common Core State Standards and the push for national standardized assessments is only the latest outgrowth or development of that perception. Of course, there is plenty of misinformation, and people are constantly asking me to explain the Common Core, PARCC, NCLB, accountability, etc. And I try to do so with as little bias as possible. But we all have an opinion. 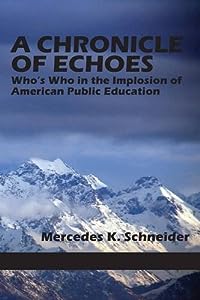 The latest voice to enter the murky world of public education reform - especially the corporate movement behind the establishment of national standards and assessment - is a teacher and education blogger with an amazing knack for statistical analysis and an ability to dig up the bones on education. Writer, teacher, researcher Mercedes Schneider began making a splash at her blog about a year and a half ago, and she has been one of the most prolific in tracking down the truth by "following the money." Now, she has compiled all the research into a fascinating expose of "Who's Who in the Implosion of Public Education." The use of the word "implosion" certainly does not hide Schneider's criticism of and contempt for the people behind the corporate education reform movement. And, it's not, as Anthony Cody notes, for the "faint of heart" in education controversy.

But it appears to be a pretty compelling and informative look at the past decade or so of changes in public education.
Posted by mmazenko at 3:08 PM