What Happened to the Conscience of a Conservative?

Those names evoke character, integrity, ethics, conviction, respect, and a deep abiding faith in the American people and in the nearly 250-year-old American experiment in self government. These icons of political leadership are the mantle of the modern American conservatism which traces its roots back through Russell Kirk to the foundational ideas of Edmund Burke. The essence of this belief system, which is not an ideology or a political platform, is a faith and trust in stability, permanence, prudence, a moral/ethical order, and the institutions that establish and maintain the opportunity for individuals to live free and independent. These men and these ideas were, at least through the 1980s, the common thread of the Republican Party.

What has happened? And how was it even possible?

There is no logical, rational way to square the presence of Donald Trump in this tradition or the party. I cannot fathom how anyone can align that shell of a man with the names Eisenhower, Goldwater, Reagan, and Bush. From the time of Burke, sound moral and ethical character has been the standard and the non-negotiable quality of a conservative, prudent sometimes to a fault. Yet today we have news that the former White House Chief of Staff, John Kelly, an honorable and decorated military hero and honest man had this to say about the current President:  "The depths of his dishonesty is astounding. The dishonesty, the transactional nature of every relationship, though it's more pathetic than anything else. He is the most flawed person I have ever met in my life."

Kelly's words are terribly sad, but not surprising, given what we have witnessed since Donald Trump announced his candidacy in true media info-tainer style back in 2015. At that time, I heard from many trusted conservatives who brushed off the media attention with comments like "he's not a serious man." But the campaign became quite serious, and he has done serious damage to the country and a political party in four brutally long years. Even now as men like Senator Ben Sasse begin to heed and parrot the warnings of Mitt Romney and Jeff Flake and George Will and David Frum and Evan McMullin, it's too late to forget what we've seen, to forgive what the Republican Party has allowed.

And yet, still, I struggle to understand how people can look back to the legacy of Ike and the Gipper and somehow still stand silent like Colorado Senator Cory Gardner, or worse acquiesce to acceptance or outright praise and even endorsement of a truly harmful egomaniac. Basically, what has happened is capitulation. It's been a selling out of values and ideals in exchange for legislative and governmental policy gifts. And that makes me rather sad because the "Conscience of a Conservative" rests upon firm moral conviction, and those beliefs are sacrosanct and non-negotiable. Those beliefs have no wiggle room and no latitude for the abrasive, aggressive, inappropriate, unethical, and embarrassing words, behaviors, and actions of Donald Trump.

For someone who grew up in the Reagan era and worked on his first political campaign for a pious and ethical man named George H.W. Bush, the reluctant acceptance and ultimate embrace by the GOP of Trumpian politics is simply beyond the pale. Decorum and manners and "decent respect to the opinions of mankind" should be the bar and standard for our behavior and even our politics, and that's why I am saddened by attacks on the career of Joe Biden. It's one thing to challenge and criticize a candidate's positions and votes, but I cannot fathom Ronald Reagan or the elder Bush tearing down a person's forty-year career just to win an election. Yet that's what I see in commentary and social media, and it's simply a reflection of a political party that has allowed itself to become as mean and contemptuous as its current President.

And, that's what it means to be a Republican, but not a conservative. For, whatever anyone wants to call that man's beliefs and behaviors, they are not conservative. And anyone who passively accepts, or worse condones and endorses his behavior and his continued power and influence is quite simply not conservative, not in the tradition that dates back to Burke. Thus, even if voters, legislators, and commentators seek to justify their capitulation based on party platform and legislative agendas, that is no excuse for remaining silent. To not assertively and regularly call out and condemn the outrageous and embarrassing behaviors of the President is to, in fact, embrace his actions as acceptable. And they're not. Republicans could have accepted the policy achievements while still daily challenging, scolding, distancing, isolating, and condemning every transgression, every insult, every slight, every evasion, every obfuscation, every inappropriate and unethical word. That is what character and integrity require; that is what the conscience of a conservative expects and demands.

And, so I ask now and will continue to ponder for those who are moderate, independent, and/or conservative but not Republican, "What happened to the conscience of a conservative?" And when will the Republican Party be a welcome place for conservatives who have a conscience? When will people who claim to be conservatives and who claim to be the legacy of Goldwater and Reagan finally say, "Enough." Character and manners matter, perhaps more than anything else if we hope to maintain a civil society. To that end, the only answer to a man like Donald Trump, and any future candidate who seeks to follow the politics of chaos and disruption, is "No." 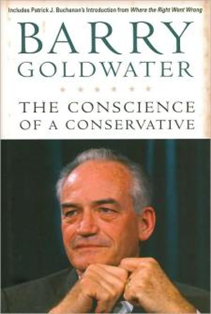