The Way Pete Souza Saw It -- It's about Dignity

Late in the documentary The Way I See It from Focus Features, the former White House photographer of the Obama administration Pete Souza says something to the effect of "I wouldn't be doing this if it were Jeb Bush or John Kasich. It wouldn't be necessary. This is not a partisan issue." The "this" he refers to is his political activism via Instagram posts aimed at challenging, mocking, even trolling the unsavory, embarrassing, and even dangerous behavior and tweets of outgoing President Donald Trump. Basically, Souza counters Trump tantrums, rants, and threats with positive and moving photos from the Obama years as a way of demonstrating how the President is supposed to behave -- with dignity.

Pete Souza is spot on, and the documentary, which spotlights both the Obama and Reagan years, is a beautiful work of art that reminds us of the way things ought to be, and I highly recommend it. The Obama era covered eight scandal-free years and dignified leadership from a true man, a mensch, a good person who honored the office and the legacy of Washington and Lincoln. Outside of his politics -- and he was a true politician and Democrat -- Barack Obama was a man of character. And that is the non-negotiable quality we must have in a President. And that is why the current administration is so unsettling and simply so .... wrong. It's why the GOP is in a ethical conundrum, it's why Never Trumpers rightfully voice their concerns, it's why many people are "conservative but not Republican."

Barack Obama was a very good man and president. As was George W Bush. As was Bill Clinton. As was George HW Bush. As was Ronald Reagan. As was Jimmy Carter. As was Gerald Ford. As was Richard Nixon ..... and so on. And I pause with the inclusion of Clinton and Nixon, for these were men with ethical lapses, to be sure. And they undoubtedly tarnished their legacy, their years in the White House, and the very office of the Presidency. But those mistakes were exactly that -- mistakes. Those good men made bad decisions. They were not undignified and embarrassingly so on a daily if not hourly basis. They were not woefully unfit for the highest office in the land. They were not the truly sad situation that has burdened our nation for past four (actually closer to five) years.

Regardless of politics, Pete Souza is right. It's about dignity. Thankfully, that virtue will soon return to the Oval Office. Hopefully it returns to the rest of us as well. 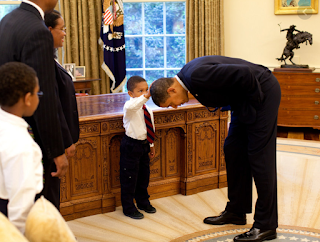