By now you've probably heard the buzz and seen the pics of Representative Alexandra Ortiz-Cortez (NY) at the Met Gala. While AOC, as she is commonly known, impressed and entertained some people with her dress and political statement, others saw the move as glib and crass. In my view, both sides are taking the image and the action too seriously and probably missing the point.

The "Tax the Rich" dress at the Met Gala was nothing short of hilarious, ironic, and amusing. It was a perfectly crisp and apt moment in a world that has become all too absurd in its one-sided seriousness. The great satirists from Mark Twain to H.L. Mencken are, in my opinion, looking down and nodding in sardonic approval. And, while I don't often agree with Rep. Ortiz-Cortez, and while I often find myself rolling my eyes at her public statements, I really enjoyed this moment.

Wear that dress, girl. Flaunt it. And to quote the inimitable Robin Williams, "Joke 'em if they can't take a ____." 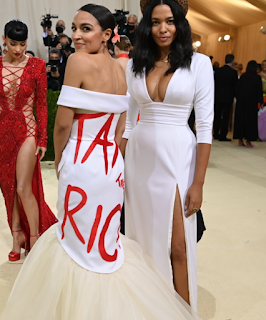