In the early 1980s, my political coming-of-age coincided with the Reagan Era and the emergence, as well as eventual dominance in the GOP, of supply-side thinking. One of the earliest memories I have of being intrigued by a politician outside my electoral area was a key figure in those two historical events. Jack Kemp was the original compassionate conservative, long before the late 90s led George W Bush to both need and smoothly co-opt the qualifier. And in 1987-88 when I was becoming politically active and ready to participate and vote in my first presidential election, Jack Kemp was the Republican who inspired and intrigued me. Jack Kemp was a man who preached and sought prosperity for all Americans, and truly pursued policies based on that idealistic, albeit somewhat naive, belief and plan. It was never about political power or winning elections or appealing to a segment of the electorate. Kemp was a true evangelist for the American Dream. Everything he did was about pursing the Kemp Doctrine: "upward mobility, economic opportunity, cultural diversity, and racial justice." He was a politician who was "principled, dynamic, positive, cheerful, inclusive, bipartisan, optimistic, unorthodox, disposed to compromise .... interested in ideas and action, not political tactics or personal attacks." Jack Kemp was an American. And we can use another Republican like him. 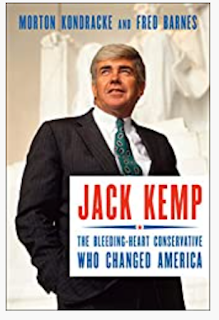