In the summer after my college graduation, I interviewed for a teaching job at my former high school in the small town of Alton, IL, and then I promptly moved eight thousand miles across the world to teach English at a buxiban, or “cram school,” in Taipei, Taiwan. It was one of the boldest moves I ever took, and it was one of the best decisions I ever made. Of course, I had help in the choice, specifically because the young woman I was slowly falling in love with was heading to Taiwan to teach, and I didn’t really have any other plans. It was 1992, and English teaching jobs weren’t exactly falling into my lap, not that I was searching too diligently. The ‘91 recession and state spending cuts didn’t help either. And my wife’s former roommate, who was Taiwanese, was returning home to live with her parents and mentioned the idea of us teaching there. So, after a visit to the Educational Placement Office of the University of Illinois, where we found a rather basic flyer offering teaching positions in Taipei at the Hess Language School, Julie and I bought our tickets and boarded a plane.

Since that time in Southeast Asia, the idea of moving abroad has been one of the most consistent pieces of advice and encouragement I give my students: go somewhere else for a little while. Take leave of your comfort zone and flee the familiar. Get out of your country; even if you love, leave it. This leap of faith may simply be a semester abroad during school, or it could be a work-study program or a job-swap. It might be a single gig for your company or a one-year appointment. Whatever it is, when the opportunity to travel is available, take it. My wife and I ended up staying in Taiwan for nearly five years, teaching and traveling the world. We went to Honk Kong for weekends, lived a month in a bungalow on the Greek isle of Paros, spent a week surfing and lounging on Bali, and got engaged in the botanical garden of Rome. Eventually, we moved back to the United States and lived a couple years in the city of Chicago, where she worked as a pastry chef and I taught middle school. Moving home after time abroad was so refreshing, and the Midwest became new again.

When we moved to Taiwan, one of the first books I read was Peter Mayle’s best-selling memoir A Year in Provence, in which he recounts moving to the south of France in his fifties. It was the perfect complement to our journey, a bemused and whimsical reflection on his decision to uproot himself and purchase an old house in the south of France. And about that time I was learning of others my age who were willing to travel for work and adventure. An old friend took a job out of college driving one of the Oscar Meyer Weiner-mobiles around the country, a year-long gig she parlayed into a job as entertainment guide and travel writer on a luxury cruise ship. She introduced me to a twenty-three old coworker who just happened to have “the greatest job ever” as the ship’s golf pro, which basically consisted of living for free while giving golf lessons at the ship's simulator and accompanying wealthy retirees for rounds at exclusive exotic resorts around the world. That gig might only be bested by news of an old fraternity buddy who took a job as a scuba instructor on a private resort island owned by a huge cruise ship company. Some friends spent summers working for the forestry industry planting saplings in Canada, and others camped and hiked around Alaska, supporting themselves in the salmon canneries. You can imagine which of these jobs was the least fulfilling but most memorable by smell alone. Last year I spent a couple weeks in Australia, exploring Sydney and the Gold Coast, visiting a friend who’d also said yes when his tech company asked him to move his family “Down Under” for a short-term assignment. In all, the people willing to take a chance on going somewhere else have almost always returned home with wonderful memories and few regrets about their decision to go somewhere else.

In an essay from his first book All I Need to Know about Life I Learned in Kindergarten, Robert Fulghum wrote about lessons he’s learned from a lifetime on the move, having lived thirty-seven places in fifty-one years. In one of his many reflections, he described picking up a couple hitchhikers who were holding a sign “Somewhere Else and Back,” a slight twist on the discontented sign “Anywhere But Here” mentality he recalled from the Sixties. They told him they actually liked their home, but they just wanted to be “somewhere else for a while.” It’s not an uncommon feeling, Fulghum notes, for people throughout history. The nomadic itch has always been part of man’s collective DNA. For much of his later adult life, Fulghum and his wife have divided their time between a houseboat in Seattle and the island of Crete, and both places are equally home to him, albeit in different ways.

Granted, I know many of the stories I share seem to come with a bit of privilege. Many young people simply don’t have the option, opportunity, or luxury of uprooting themselves for a year or more of adventure. However, looking outside our comfort zone for opportunities is rarely bad advice, even if most people aren’t willing or able to take the chance. I grew up in southern Illinois on the banks of the Mississippi, and I knew of people who had never crossed the river into St. Louis. I’ve also lived for years in Denver, and I know of people who have never ventured the forty-minutes west into the Rocky Mountains. In reality, most Americans settle within twenty miles of where they grew up. And the idea of having roots and “staying put” as Scott Russell Sanders wrote is an admirable and perhaps even preferable mindset to the endless migration of people who Salman Rushdie said “root themselves in ideas rather than places” and who Pico Iyer called “global souls.” Certainly, settling down is a goal for most, for that’s how a house becomes a home, and our homes become communities. That said, I will still always recommend to my students the simple idea of “somewhere else” as a worthwhile destination. 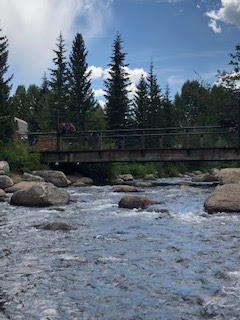