Until someone shows me a video montage of flops by Michael Jordan, I’m not having any discussion of the NBA GOAT and Lebron James. Lebron is an incredible baller, truly a generational force, but the practice of flopping is cheating, and LeBron James has taken this twenty-first century form of athletic cheating to an embarrassing level. Lebron's flop-apalooza took center stage the other night in a game against the Memphis Grizzlies when his animated fall was called out vociferously by the Memphis broadcasting crew.
"Are you serious? Are you kidding me, man?... That is awful, horrible, whatever other words you can come up with that are synonyms with those. That's what that was."

Granted, many people will argue the game has simply changed, and it's not wrong for any player to take whatever advantage he can to succeed. But, come on, man! That change to the game and the deliberate choice by Lebron to take advantage is beyond the pale. As Kevin Garnett says in his new memoir "Can you imagine not being able to hand-check Jordan?" That's the new game with no hand-checking, and that's the reason people like Barkley and Rodman turn their noses up at talk of "the greatest" in today's game. But the flopping is a different kind of cheating to me. It's just an embarrassing part of his game, a trick that was not part of Magic's or Bird's or MJ's, and it's a stain on "King James," his legacy, and any claim of being the GOAT.

LB is such a talented, gifted athlete who is also a class act as a human being off the court. He has done so much for the game, for his teammates, and for vast numbers of people in need. He truly is blessed by the gods in terms of his prowess, and he absolutely works as hard as anyone in the league ever has. He is truly a genius in his vision on the court. And that is what makes the flopping all the more egregious. He simply doesn't need to do it. Ever. Yet he has embraced that tactic to a level nearly no other player in the league does. Everyone knows that King James is King of the flop. No one is criticized more for it, and that's why Barkley just shrugs and laughs at him, and then apologizes for the handicapped defenders. In a league that has established hands-off rules on defense, opposing teams literally have no ability to reign him in near the hoop. He doesn't ever need to flop or take an extra step.
Admittedly, this sounds like a bit of griping to the younger gen to "get off my lawn," (and I definitely have an inclination to be a grumpy old man), but I am just so disappointed in him and embarrassed for what he has done in that area. It's just a shame, and he alone can fix it. He is truly legendary, but I'd like the NBA to start hitting him with regular technical fouls as a warning to get back to the game of basketball. 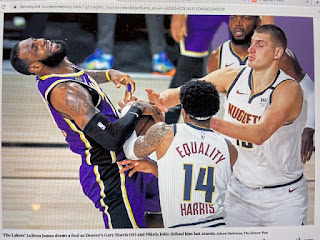