"If a man does not keep pace with his companions, perhaps it is because he hears a different drummer. Let him step to the music which he hears, however measured or far away."
Though it was written in the early part of the nineteenth century, the previous sentence is an apt and accurate description of punk rock and the entire punk aesthetic. Henry David Thoreau, the man who basically coined the phrase and inspired the idea that some people "march to the beat of their own drum," epitomized the spirit of punk. While obviously emphasizing an anti-establishment stance, the punk rock ethos is as much about being authentically individual.
As I continue to develop my ideas about Thoreau as the original American punk, I've been enjoying the insight from a great book The Thoreau You Don't Know: What the Prophet of Environmentalism Really Meant by Robert Sullivan. While the book's title acknowledges the environmentalism for which Thoreau is often credited, Sullivan's analysis actually digs deep into the entire philosophy of Thoreau. It was much more than the ponderings of a man who found truth and answers on how to live by spending time amidst "nature," living in a cabin by Walden Woods. It was also, like Greg Graffin explains in his Punk Manifesto, about the "personal expression of uniqueness that comes from the experiences of growing up in touch with our human ability to reason and ask questions" and "a process of questioning and commitment to understanding that results in self-progress, and through repetition, flowers into social evolution." In his cultivation of individuality and the necessary authenticity needed to maintain it amidst a society pushing conformity, Thoreau was the original American voice of being an original American voice.
In Sullivan's analysis of Thoreau's life, beliefs, and actions, I particularly enjoyed his insight that "In living at the cabin, .... Thoreau was rejecting the changes that nineteenth century America presented to him."
How very punk. 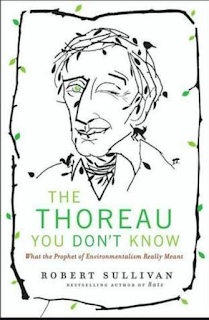