Talking Heads Don't Teach Us Anything

I've written before of my distaste for the talking heads on cable news who mask their info-tainment as news, commentary, and authentic debate about the issues. Here are my latest thoughts on that problem in my column for the Villager:  "Talking Heads Don't Teach Us Anything"

Talking Heads Don’t Teach Us Anything

The respective hosts of talk television shows on Fox News and CNN take to the airwaves five nights a week to allegedly provide thoughtful commentary and debate about the issues of the day. What actually happens could hardly be considered thoughtful, commentary, or debate. Instead, these savvy media personalities orchestrate a nightly circus of obfuscation and diversion. The same can be said about Sean Hannity and Rachel Madow, about Chris Cuomo and Laura Ingrahm, about Lawrence O’Donnell and Jeanine Pirro. And it’s literally hurting America.

Approximately seven million people spend weekday nights watching the talking heads on cable news, split among FoxNews, CNN, & MSNBC. While that may seem like a large audience, it’s only a tiny fraction of the nation’s 331 million people. So, it’s at least reassuring to know less than one percent of the nation wastes its evenings tuned in to echo chambers of divisive partisan politics. Far from delivering actual news or insightful commentary, the shows are simply vehicles to produce ad revenue for the stations and lavish salaries for the hosts. At one time the business model for media was large audiences with broad views; the new approach caters to limited audiences who seek narrow content designed to reinforce their own individual beliefs, biases, and prejudices.

Contemporary media critic and humanities professor Neil Postman described the talk radio and television genre as “info-tainment.” In his 1985 non-fiction book “Amusing Ourselves to Death,” Postman explained that from a word count and general content perspective all the information heard in an hour-long television program could be found on a single page of a newspaper. Thus, as people sit through hours of talking heads like Carlson and Lemon ranting and agitating, they are learning almost nothing. In fact, that’s precisely the point of these shows. They exist as a form of soundbite news with all the intellectual nourishment of a bumper sticker.

While these shows are broadcast on news stations, they are actually an affront to the news-gathering mission of journalism. In a speech to the Women’s National Press Club in 1960, Clare Boothe Luce challenged the harmful direction of journalism by warning “What is wrong with the American press is what is in part wrong with American society.” She questioned whether the American press should be excused for not providing “more tasteful and illuminating” content simply because they were businesses and had to give the audience what it wanted. I cannot imagine what an ethical and inspirational woman like Luce would think of today’s contemporary media. At best she’d be ashamed the Fourth Estate would ever be used to agitate and inflame America’s internal struggles and conflicts rather than enlighten and resolve them.
In a now legendary episode of CNN’s Crossfire when Jon Stewart chastised the show’s hosts Tucker Carlson and Paul Begala, the schtick of the cable talk show was first called out as fraudulent. When the hosts claimed their show debated the issues, Stewart responded, “No, no, no, a debate would actually be great.” But that’s not what happens in the contemporary era. Debate has a rich, extensive history as a form of public discourse in American society. The actual Lincoln-Douglas debates lasted three hours, with no commercial interruptions. One candidate spoke for an hour straight. The opponent responded with ninety minutes of claims and refutations. The first speaker then finished with thirty minutes of rebuttal. Imagine the deep thought-provoking content developed over that time. Imagine the thoughtful attentiveness audiences must have displayed.

At one time, Americans could sit and listen for hours of truly enlightening intellectual content. The lyceums of the New England Renaissance featured public intellectuals like Emerson, Thoreau, and Twain who travelled the country, speaking for hours at public events that provided an organized adult education system. Similarly, Boulder’s chautauqua system was a historical example of a time when Americans sought out and sat for hours of thoughtful discussion that wasn’t interrupted every eight minutes for a commercial break.

Ultimately, the media, from large national television stations to small local newspapers, has a sacred responsibility to seek, protect, and promote the truth. Clare Booth Luce ended her speech with these words: “Let us watch then, with hope, for the signs of a new, vigorous leadership in the American press. For if you fail, must not America also fail in its great and unique mission, which is also yours: To lead the world toward life, liberty, and the pursuit of enlightenment.” 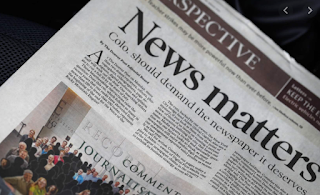