Years ago while I was doing the Colorado Writing Project and discovering my genre of op-ed commentary, I penned a short politically-inspired piece about Mount Rushmore and what it could and should mean for the country. I haven't thought about that piece for a long time, but as I assemble a manuscript of pieces from over the year, I ran across it and thought it was worth including and sharing.

In a popular film from 1991, Grand Canyon by Lawrence Kasdan, a character played by Danny Glover tells Kevin Kline’s character to “get yourself to the Grand Canyon.” In a movie about personal discovery and re-defining faith in society and the self, the Grand Canyon serves as a point of inspiration, implying that a trip to this wonder of the world might provide some degree of epiphany about a person’s direction in life. These days, as the media and political pundits describe the country as divided into Red and Blue states, I think America needs to “get itself to Mount Rushmore,” or Mountain Rushmore as my four-year-old son likes to call it. For a year now, he has been fascinated by this monument. I’m beginning to feel the same way.

Both literally and metaphorically, we need to “get ourselves to, or back to, Mount Rushmore.”

The uniqueness of this monument to the icons of American history is the universality of these men. In a seemingly more and more partisan country, these men are regularly claimed by both political legacies. At any given time these monoliths of American political rhetoric are adopted by Democrats and Republicans, liberals and conservatives. The point, I believe, is that they are both and neither. They are all, as well as none, of the above. The point is they are, quite simply, Americans.

As a high school English and social studies teacher, I regularly give book talks or book recommendations to my students at the start of the class. Early in the year I urge my students to read Rush Limbaugh’s The Way Things Ought to Be. The next day I’ll recommend Al Franken’s Rush Limbaugh is a Big Fat Idiot – and Other Observations. I’ll recommend Limbaugh’s second book See I Told You So, and I’ll follow that with James Carville’s We’re Right: They’re Wrong, which is intended to refute most if not all of Limbaugh’s beliefs. The point of this is that none of these men, or their ideologies, is completely right or wrong, and it’s narrow-minded and pretentious to think so. Having been conservative and liberal, Republican and Democrat, I have found common ground with both Limbaugh and Franken. Yet, I groan when I listen to them for too long, hearing their common sense arguments veer off into rants and diatribes that appeal to their core listeners, yet do nothing toward really solving the problems.

In giving my book talks, I’m encouraging my students to open their minds. I hope they will read each side, listen to each party’s rhetoric, and decide what they believe to be right and true. I’m hoping they get a bit from each side.

When I look at each of the faces on that cliff in South Dakota, I see leadership on the grandest scale. These are men who held deep powerful convictions, yet they acted in the most pragmatic ways. While Jefferson believed in limiting the power of the federal government, he used such power without shame when purchasing the Louisiana territory. While Lincoln knew the Constitution and the law as well as anyone, he was not above manipulating both to save the union. Roosevelt was a fearless capitalist, who nonetheless, was not afraid to use the strong arm of Washington to restrict the more troublesome qualities of the economic system. None of these men were so rigidly foolish to believe that one ideology had all the answers. In fact, some might say that the brilliance of the Founding Fathers lay in their understanding that they didn’t know everything, and could not foresee many problems America would face.

These were men who governed in a way that was always best for America. Far more than is the norm for political leaders in the twenty-first century, the Rushmore presidents were deeply devoted to keeping the promise that is delivered in the Declaration of Independence and the United States Constitution.

I can’t help but believe that the men of Rushmore would be profoundly dismayed by the nature of political discourse in America today. It’s not that they would be opposed to differences of opinions. Think of Jefferson’s disputes with Adams, Lincoln’s presiding over the greatest division in American history, and Roosevelt splitting off to form a third party in 1912. What each of these men was doing throughout their careers was fighting against the corruption of the ideals upon which America was founded.

I can’t imagine what these men would think if they knew that $500 million was spent on the two presidential campaigns in 2004. While Jefferson wrote the book, so to speak, on free speech, I can imagine he and the other Rushmore men would point out, “That’s some damn expensive speech.” I can almost see Roosevelt’s sneer. I can feel Lincoln’s eyes staring with profound disappointment.

We need to streamline a government and a political system, so with all the pragmatism of Washington, Jefferson, Lincoln and Roosevelt, we can stop shouting at each other and criticizing each other and demeaning each other, and simply fix the problems. We need to find the commonality that is the greatness of the men of Rushmore. 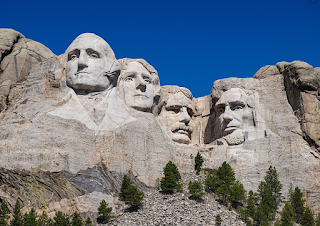