Though it has slipped into obscurity in terms of the literary canon, Ellen Wood’s Victorian novel East Lynne created quite the publishing sensation when it first appeared in 1861. However, later criticism of its melodramatic qualities probably contributed to its loss of favor in comparison to the more literary and socially critical novels of George Eliot and the Bronte sisters. That is not to say that charges of “melodrama” or “sensation” are unjustified. Various elements or characteristics are common to “melodramatic” novels, including “excessive emotion” and a reliance on stock characters who “appeal to each other and the audience by means of exaggerated expressions of right and wrong” (Vicinus). Clearly, the contrast between figures such as the noble Archibald Carlyle and the rakish Francis Levison meet that criticism. Additionally, aspects such as a contrived and complicated plot, unrealistic coincidences, and exaggerated displays of emotion are also present in the saga of young Lady Isabel. However, it is precisely the exaggerated portrayals of standard components of Victorian society in an exciting and complex manner that, in fact, make East Lynn such an engaging and successful example of Victorian literature. 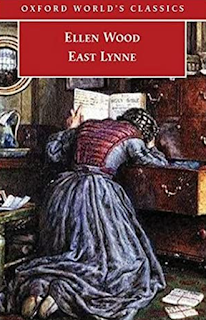