I don’t think I like the idea of a shot clock in high school basketball, a potential change that was announced by the national federation last week. This progressive approach will not be good for the high school game, and it's just one more example that traditions and institutions matter, often as a hedge against frivolous and unnecessary change. Our games should not just be about speeding up and pursuing more points and more shots for pure entertainment. There is so much more to the game, especially at the younger levels, and focusing on quickened pace to force more shots to produce more scoring simply misses the nuanced beauty of sport.
While the addition of the shot clock most certainly contributes to and ultimately enhances the college and pro game, it will hurt the high school leagues and exacerbate imbalance among schools. Thoughtful pacing, ball control, and even the often dreaded "slow down game" are competitive strategies many schools use to their advantage. In the spirit of competitiveness, such deliberate pacing is a necessary tactic that smaller schools sometimes need. And this measured approach is no less significant in terms of athletics than the advantage some schools have simply by nature of larger pools of kids, and perhaps larger kids as a result.
States will each have to make their own decision on the need and benefit of a shot clock, and it's to be expected that coaches and athletic directors are starting to weigh in on the option. Obviously we can expect that large schools and previously dominant programs which depend on a pipeline of top athletes to succeed at the fast-paced level will desire the clock. Smaller schools who use strategy to counter and control superior size and athleticism will certainly oppose the change. The question will be whose benefit is valued and supported by the state associations. Let's hope prudence and a thoughtful approach to what's best for the game are the key influences on the decision. 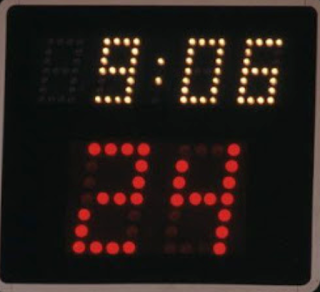