At the age of forty-nine, I am getting into art appreciation, and I'm messing around with ways to live more artfully, looking at and pondering and reading on and writing about art. As a newly developing art novice and critic, I'm visiting galleries and exhibits and pondering what I like and what I might say about art when looking at it. On a recent visit to the Art of the State 2019 exhibit at the Arvada Arts Center in Colorado, I had time to ponder 154 different pieces of art and determine how I feel about it. Certainly some of the more abstract pieces like the one made of inner tubes may give viewers pause. What’s the point? And is it art? 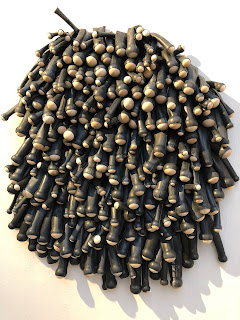 The piece is a work of found art entitled "Well Hung Butyle Remains" by Nederland artist Jessica Moon Bernstein-Schiano who seeks to spotlight the significance of discarded objects. In college I would have called this junk art, and I was always a bit mystified by artist friends who practiced it. As an older person, I am now appreciating it a bit more, even if it's not something I would hang on the wall at my house. Though I'm not opposed to the idea of abstraction in art; in fact, the types of art I'd be inclined to curate and purchase tend toward the ab-ex view like Ellen Moershel's piece "Valdez," which is acrylic on canvas, or the naturalistic "Magwa" by Mai Wyn Schantz who painted the oil on stainless steel and made her statement on nature and technology by emphasizing through silhouette what is not there. 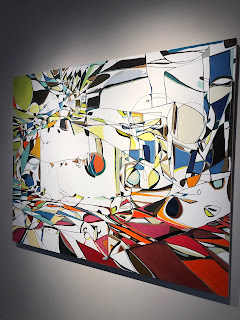 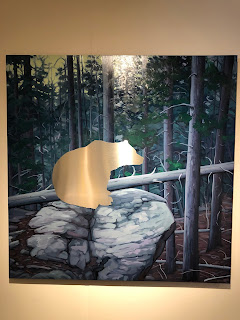 So, I'm exploring the visual and textural and structural arts and asking myself what I think about them. A great resource for getting into the experience of art is a book I recently checked out called The Art of Looking by Wall Street Journal art critic Lance Esplund. I appreciated Esplund's story of how as a child he'd received a book about the great masters such as Rembrandt, and he knew that he was supposed to appreciate their works, but he simply wasn't really moved by them. It wasn't until he first saw the work "Howling Dog" by abstract-expressionist Paul Klee that he discovered a painting, a piece of art, that affected him in a deeply emotional, even spiritual, way. At the same time I was reading Esplund's story, I was also working through a fascinating piece of art reflection called The Artist's Reality: Philosophies of Art by Mark Rothko. His views opened my eyes to the multiple ways we can experience art.

We began the new semester - and 2019 - with a staff activity reminding us about the eight "Sources of Strength" that we are emphasizing this year at school. As one of the SOS leaders, I was asked to share the definition of one strength from the wheel and then provide an explanation of how that operates in my life. Here are my comments on spirituality:


“Spirituality is practiced in many ways, but at its core we consider what gives a sense or purpose and connection to our spirit. Thankfulness is a profound way to practice spirituality together, no matter what our cultural heritage and/or spiritual tradition.”

To me, spirituality is our connection to something beyond the physical world, and it can be what gives our lives meaning and purpose. I went to Catholic school and was an altar boy, so early in my life my, spirituality was my faith. But even then I actually practiced a more nature-based spirituality. Occasionally, I would skip mass to go climb the bluffs in my hometown overlooking the Mississippi River, and I’d spend time just being in nature. When I moved to Colorado, it got even better with the mountains, for to me Summit County really is God’s country to me.

So, being an English geek, I’ll conclude with what I think is Henry David Thoreau’sdefinition  of spirituality: I went into the woods because I wished to live deliberately, to front only the essential facts of life, and not, when I came to die, discover that I had not lived. 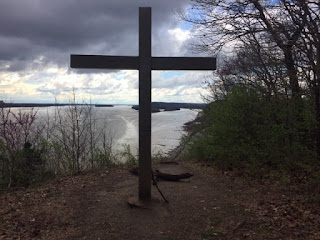 Posted by mmazenko at 7:33 AM No comments:

Tucker Carlson, Rod Dreher, & the soul of the GOP

So, over at the American Conservative, editor Rod Dreher created a bit of a social media stir the other day with his column, "Tucker Carlson For President." Dreher was responding to Carlson's opinion piece at Fox News which used Mitt Romney's op-ed challenging the President as a spring board for his explanation of what's really wrong with America. You can watch Tucker's entire bit below. The problem for Dreher on the social media front is that Carlson's bit came just days after he had explained how he felt no moral obligation to let more poor people into the country (ie. migrant caravan and asylum requests) because, well basically, "it makes our own country poorer and dirtier and more divided." As could have been expected, the backlash came with advertisers pulling support in opposition to comments that sound pretty racist. Tucker's comments are pretty indefensible, though he'll stand by them; the problem is that by focusing on Tucker's immigration comments, the message of his column gets lost. And Dreher explains, "First, TC is no racist-misogynist. Second, 'Tucker Carlson For President' was my headline over a blog post praising his criticism of GOP market fundamentalism & elitism. My way of saying "I want a Republican presidential candidate who says these things."

In all honesty, Tucker's opinion piece and Dreher's support of it is pretty interesting to me - I genuinely like and agree with many points that these men make, specifically problems with the dissolution of the American family, the stubborn stagnation of wages, and the frightening rise in opioid and cannabis use. Truly, Carlson has outlined some very specific challenges in contemporary American society, and he has synthesized a pretty significant problem for the Republican Party in its unwavering support of the economic libertarianism. Granted, he does have a Gladwell-esque tendency to oversimplify hugely complicated problems that result from personal choices and the nuances of our political system. The other problem is Carlson's general glib, frat-boy reputation and history that makes it hard to take his criticisms of the Republican Party seriously. That's especially true because he peppers his comments with subtle side-bars blaming the Democratic Party for all the nation's social ills and asserting "Socialism is a disaster" because of, ya know, Mao and Venezuela.

That said, Carlson and Dreher are not wrong in their criticisms of contemporary society and our two major political parties. The problem is expecting that the Republican Party will somehow be able to maintain its identity (and long standing platform and political affiliations) as it takes on the political positions and the tough work of addressing the problems and challenges faced by what Carlson calls "normal Americans."

Posted by mmazenko at 3:44 PM No comments:

Be Awesome - make your 2019 Extraordinary

If you are of a certain age, you certainly recognize those words from the Robin Williams film Dead Poet's Society. So many Gen Xers and older Millennials fell in love with that film in that moment, and in the back of our minds, we always hope to take "Oh, Captain, my Captain's" advice. As I've noted before in previous posts, we are a people who admire and value excellence. That's why our athletes are held in such esteem - they remind us of the human potential, especially when they push the limits of what we think is possible. And, we like to tell ourselves that we can do that too. Like the lyrics from the song by Alesso, "Everyday people do everyday things, but I can't be one of them."

The YouTube site People Are Awesome is a record of those non-everyday people doing extraordinary things. It's a great place to watch and take inspiration.

Buy Me Coffee? Support the Writing you Read

I access a great deal of free content while surfing the internet. But I also understand and appreciate the need for pay walls on some sites. Content is a product and a service, and for that reason the creators deserve compensation for the work. To that end, I just made contributions to two sites that regularly provide information for free - Wikipedia and The Guardian. Neither of the sites charges for  content, but they do occasionally request donations to help maintain production. If you are a regular consumer of information from a place like Wikipedia, (and who isn't?) I'd recommend throwing a little cash their way. I also really like the model used by the Guardian, and I wish more news organizations like the Wall Street Journal or the New York Times would allow payment on an a la carte basis.

So, in that spirit of giving, if you are enjoying the content on this blog, perhaps you will consider making a donation to support my site by "buying me a cup of coffee," via the payment button at the upper right corner of my blog. I am hoping to expand my writing and content curation to a larger and more individualized site in the future, but it will carry regular costs. So, any financial support you can offer will be much appreciated.