Nothing Wrong with Snow Days

Amidst the snowy winter of 2019-20, some school districts in Colorado are facing the possibility of needing to extend their calendar beyond the already established end date because of the large number of snow days and snow delays they've already used. The only reason they might be required to adjust the school year is because of the federal mandate that a "school year" consist of 1080 contact hours for students. Specifically the large school districts in Douglas County, JeffCo, and Cherry Creek may need to add days.

And that is simply a bunch of nonsense.

In Illinois, numerous school districts made news last year by effectively eliminating the occurrence of snow days by mandating that on weather emergency days, students still "attend" and complete lessons via digital platforms and online learning. For example, the school district of Peoria approved Snow Day E-Learning, during which students will complete online assignments or take home packets according to the choice of their parents. That "choice" is necessary for the simple reality that not all families and students can be assumed to have internet access. Additionally, during snow events internet service could be disrupted. So, the Illinois State Board has approved allowing five "learn from home days" in the event of weather emergencies.

And that is also simply a bunch of nonsense.

Everyone in and out of public education knows, or should know, that "seat time" in schools is an entirely arbitrary number, and nothing is guaranteed by presence in or out of the classroom. Many students actually need more than the allotted time to learn while many other students could master standards and complete curricula in far less than the standard of 175 or so "days of instruction." In reality, all of these decisions should be reserved for and decided by individual schools, or at least by the districts. It is the responsibility of the teachers and school administration to be accountable for the learning and to confirm and validate completion of a year of schooling. And no state boards should supersede that authority. And the federal Department of Education should have no input whatsoever.

There is nothing wrong with snow days or snow delays, time in the classroom is entirely arbitrary, schools and families should communicate with each other, and people far removed from the classroom should simply acknowledge how little they know about what's actually happening in the classroom.

As the fallout continues in MLB's biggest scandal since the steroid era, the commissioner Rob Manfred has been criticized by pretty much everyone except the Astros and their owner Jim Crane. Recently, Manfred indicated he would not go beyond the current punishment of a $5 million fine and the loss of draft picks, and he would not erase the Houston Astros' 2017 World Championship, and he would not take back the coveted trophy (insulting basically every baseball fan from the age of four to ninety-four by calling the trophy "just a piece of metal"). And that is frustrating many people in and out of baseball. But here's the thing: he shouldn't have to.

Houston Astros owner Jim Crane should want to voluntarily give the trophy back.

The trophy is a symbol of the accomplishment of winning one of the toughest championships in all of sports. And when winners look at the trophy they should be filled with pride and smile about all the hard work and struggle and sacrifice and tears and pain and joy that went into winning it. True winners would want to look at it every day and be filled with joy again and again. But no Houston Astro can actually do that. The trophy is tarnished. It is stained. It is dingy and dented. Any man of integrity would not even want to look at it, much less show it off to visitors and friends. Any many of integrity would not want a reminder of the embarrassment and shame. No man of integrity would want that in his house.

Granted, there are many other things MLB and Rob Manfred can do to enact some justice in the huge cheating scandal.

But, as far as the trophy goes, Jim Crane and the Houston Astros players should want to give it back.

Posted by mmazenko at 3:47 PM No comments:

Today the Denver metro area woke to inches of snow which had been accumulating all night and were certain to continue throughout the day. And that had led to the granting of snow days across most of the area school districts. So, the kids sleep, and the buses stay nestled in the lot, and the snow builds, and I sip my coffee and skim the paper as I warm up and prepare for the task that awaits ... shoveling the driveway, our common drive, and the sidewalks.

With my snow pants and boots, my heaviest coat and gloves, a bit of chapstick, and a giddy sense of anticipation, I stand on garage stairs as the door slowly rises on command, and I get the first glimpse of the powder just across the garage threshold. It's always different than it looked from the upstairs window. And as I step forward and push the first little path to check the depth, the weight, the water level, I always smile to see the darkness of the wet concrete reveal itself.

I don't understand people who don't shovel. What happened to shoveling? For as long as I can remember, shoveling is just something you do, like mowing the grass, getting the mail, and cleaning the dishes. But in many ways it's so much more than that. It'll certainly get your blood pumping, even as it brings a deep sense of calm and repose. The world just seems more alive at that time. Maybe it's the brightness across the drives, lawns, trees, and sky that accentuates angles you hadn't noticed before. At the same time, the calm muffled air relaxes the world and slows its pace. And as the paths are cleared and the drive comes into view, there is a sense of order and accomplishment to a shoveling job well done.

When we first moved into our townhouse seventeen years ago, our neighborhood seemed to care more about the responsibility and the opportunity that a snowfall provided. My neighbor and I across the way would be out soon enough working on the common drive and trying to clear it before two many cars packed the snow down, perpetuating the time it would take to melt later. Of course, we always cleared the sidewalks and made a path for the mailman as well. As the kids grew, it would always become a family affair, with each taking shifts and sections. And that second cup of coffee or hot chocolate was just so much better after coming in from a round of shoveling.

These days I still shovel, but I mostly take care of the common drive and the sidewalks alone. Most of the other driveways remain covered in snow, with either cars buried, or deep tracks from when the owner just tramped out through the snow to the car and drove away. And the peace that comes from shoveling is missed by all the people who take the weather event to spend even more time in front of their televisions or computers or phones. Kids don't seem to wander the streets with shovels over their shoulder looking for some quick cash, or simply the chance to help out an older resident. And the general consensus seems to be that if the car can drive over the snow, there's no reason to move it out of the way.

But, for me, there is still a reason. The reason is, simply, I shovel. Because that's what you do. When it snows, you shovel. 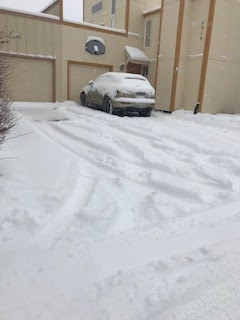 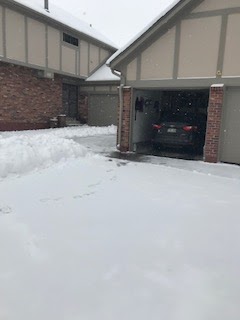