The paintings of nineteenth century French Impressionist painter Claude Monet are truly sublime. And if that's the case, then a visit to "Claude Monet: The Truth of Nature" exhibit currently showing at the Denver Art Museum is a necessary pilgrimage for art lovers, or even the curious art novice. It's like going to church, and the devout should not miss it. 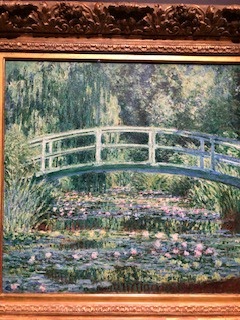 I've always known Monet as one of the iconic Impressionist painters, but I don't really think I understood the scope and significance of his career, his vision, his innovation, and his influence until I visited the Denver Art Museum for what is a vast, impressive, and nearly overwhelming exhibition of some of the most incredible paintings in history. The show covers 12 separate galleries featuring roughly 120 paintings which focus on numerous facets of his style and development over a career. And, the really cool thing is the inclusion of 22 pieces from private collections. This exhibit may be the only opportunity to ever see some of these works, such as this fascinating early picture of the harbor in Monet's hometown: "The Port of Le Havre, Night Effect." I am struck by the style, which seems almost abstract at times, and I'm intrigued by the movement he creates with his brush strokes. 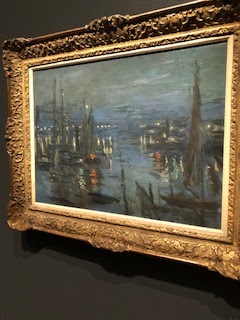 The scope of his career simply wows me, as I learned how he sold his first painting at eighteen, after a brief experimentation as a caricaturist. And he painted continuously, almost obsessively, for a career spanning nearly seventy years. He traveled extensively for the purpose of painting the local landscapes and truly pursuing the ability to capture nature -- in fact, his frustration was that light and perspective is ever-changing, and he could never be sure he'd captured the moment. Stunning dedication to craft and vision -- that's Monet. He was a student of painting, as much as he was its master, and his craft and study of color and shifting light took a lifetime to develop. On my visit to the show, I spent nearly three and a half hours exploring the subtle and deeply complex way he layers colors into a scene, such as this image from his time on the Italian coast: "Villas at Bordighera" 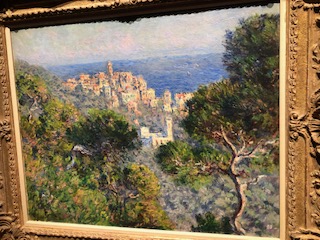 We all know the water lilies, of course. And the hay stacks. But I was fascinated with his study of water, both the Seine and the ocean in numerous series and studies he completed over his lifetime. One gallery focuses on the time he spent in one home in the village of Vetheuil, a suburb outside of Paris. It was a refuge for him, and it was a place where he truly began to explore nature, getting away from any urban influence. I was regularly brought in to Monet's focus on reflection and image, especially with the way it plays on water and even snow. The richness of this focus is exquisitely captured in his study: "Vetheuil in Summer" 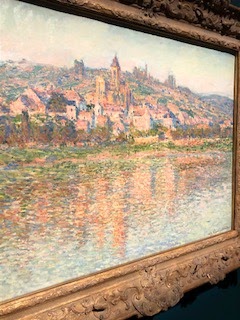 I could have spent a whole day with Monet and this exhibit, which may be a once in a lifetime opportunity to experience Monet this way. While I've seen numerous Monet paintings in galleries and museums around the world, I cannot fathom another time or place to spend an afternoon with so many masterpieces. It is a beautifully curated show, which honors the career and legacy of one of history's most important artists. Thus, if you're near Denver, or you can travel here sometime in the next couple months, don't miss the chance. This show is only making one stop in North America, and that stop is the Mile High City. 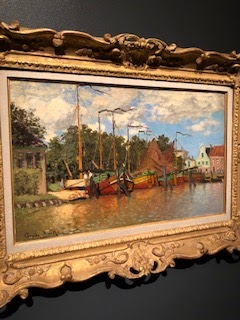 Posted by mmazenko at 4:48 PM No comments:


That’s the comment I hear and my internal response whenever someone under-appreciates, or fails to find value in, a piece of abstract art.


Abstract art and abstract expressionism can be difficult for people not instantly engaged with an artist’s manipulation of color, perspective, depth, dimension and even materials. Yet for someone who may not fully understand or “get” the art of abstraction, but who is open to learning, this weekend provides an opportunity to engage with the best that Colorado has to offer in the world of abstract expressionism. The exhibit “Colorado Abstract +10: a History and Survey” is finishing its run at the Arvada Arts Center on November 17. A sister exhibit at the Kirkland Museum in Denver runs through January 12.


The exhibit was particularly meaningful to me for what it revealed about Colorado’s place in the history of abstract art, and the unique role the state’s geography plays in the lives and creation of the artists. Colorado’s landscapes lend themselves easily to the creation of abstract art. Anyone who has marveled at the breathtaking sunsets over the Rockies or the rich colors coming off the peaks and foothills in the early morning can appreciate an abstract artist’s desire to simply play with color. Whenever I witness the literal “purple mountain majesty,” I feel compelled to capture it with my phone. If I could paint it, I would. The layered colors and textures of the clouds, trees, rocks, and flora are captivating images and moments that are forever shifting in the changing light; the views are an obvious inspiration for artists.


The “+10” of the exhibition’s title is a reference to the tenth anniversary of the book Colorado Abstract: Paintings & Sculptures by Michael Paglia and Mary Voelz Chandler with an introduction by Hugh Grant, the noted curator for the Kirkland Museum and the Denver Art Museum. For anyone interested in the art form, the book is an open invitation to investigate the history. And the Arvada exhibit has a video series running regularly in the main gallery that frames the genre beautifully. Realistic landscape art is an obvious subject for painters in the Rocky Mountain region, but the transition to abstraction has a clear connection to the rise of the form in America. Starting in the 1930s with the arrival of Vance Kirkland, the city of Denver and the Rocky Mountain region became a compelling location for artists to draw inspiration and create art. It picked up in the fifties when post-WWII found many European abstract artists moving to the United States and eventually heading west as so many immigrants and settlers do.


Colorado is an abstract place, a locale where light and perspective in the shadow of the Rockies is particularly prominent. Abstract art is about color and shapes and space and impressions. It’s feelings more than images, and the experience of visiting an abstract exhibit, or even just viewing an abstract piece, is a moment of meditation on the ethereal. The iconic abstract artist Mark Rothko believed that his paintings, and art in general, is more than just two-dimensional representations of color. It should be a spiritual or religious experience in which the viewer experiences the painting directly without additional meaning or commentary. For the people and artists of Colorado, the move to abstraction and the connection to landscape art offers an opportunity to understand and connect to that belief.

Posted by mmazenko at 6:13 PM No comments: