Krista Kafer Can Do Better after all

Amidst the public outrage and protests over the murder of George Floyd, she wrote that the statement she finds "most irritating is that we can do better." Hey, who you calling "we"? Krista is wondering what she did. It's not her fault; she's doing great. Just ask her. It's "racists cops" and "rioters, murderers, and thieves," who can "do better." Well, sure. Nobody is arguing that. But Krista is speaking up for the silent majority, all those millions of people leading error and bias free lives, but who have been wrongly indicted for the ills of society.

I'm not sure what exactly happened to Krista that she feels indicted. But I will say this:  the belief and statement that "we can do better" can and should be seen as an offer of hope and a challenge of self improvement. The "we" of contemporary society can certainly do better in so many areas. Henry Wadsworth Longfellow wrote in his poem A Psalm of Life that "Neither joy and not sorrow is our destined end or way, but to act that each tomorrow find us further than today." Life is always about getting better. I often ask myself, as well as my students, "Are you a better person than you were yesterday? A better student? A better friend? A better parent? A better husband, wife, son, daughter, neighbor? A better employee? A better boss? A better eater? A better exerciser? A better driver? A better sports fan? A better citizen? A better follower of your faith?

We can all do better. Always. In so many areas. And, really, isn't that the point. Let's all get better everyday. Even Krista Kafer can do better. And, as I read my Denver Post this morning, I was pleasantly surprised to learn from Krista's most recent column that she may be rethinking her irritation. She may have discovered a way to join in the task to "do better." As a newspaper columnist and radio host, Krista has a wide audience and notable influence in framing mindsets, promoting ideas, engaging thoughtful debate. She can use her forum as she wishes, and it's enheartening to see her use this week's platform to talk about and promote "Breaking the Cycle of Prejudice." If we could do that, we would certainly be doing better. And sharing these thoughts is one way a part-time columnist is playing a role.

And, her initial "irritation," which led to her tweet and, for me, some reflection and ultimately a blog post, has helped me focus on how I can play a role in the task we have before us everyday:  to do better. 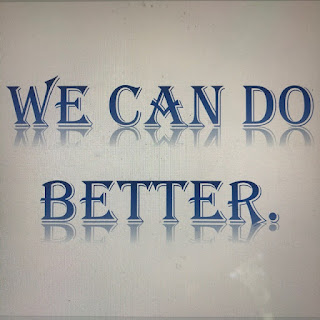 Posted by mmazenko at 2:36 PM No comments:

Many White Americans were raised with the idea of "not seeing color" as the way to combat racism and prejudice. By pledging to "judge people on the content of their character" as MLK had dreamed of, we believed were being anti-racist.

But we weren't. And that's a problem.

When Rev. Martin Luther King, Jr. said he dreamed of a day when his children would "not be judged by the color of their skin, but the content of their character," he was not hoping or asking that people ignore race and color. It was not a call for society to be color blind. In fact, being color blind in contemporary American society can lead many white Americans to inadvertently condone racism and discrimination, or to at the very least lose the ability to recognize it, call it out, and work toward correcting injustice. That unfortunate blindspot is what led Denver Bronco's head coach Vic Fangio to make a careless, ignorant, and harmful comment on race this week. Specifically, in response to the ongoing protests against police brutality, the death of George Floyd, and the Black Lives Matter movement, Fangio said:

"I think our problems in the NFL along those lines are minimal. We're a league of meritocracy. You earn what you get, you get what you earn. I don't see racism at all in the NFL, I don't see discrimination in the NFL," Fangio told reporters Tuesday when asked about his experiences in the league over the past four decades. "We all live together, joined as one, for one common goal, and we all intermingle and mix tremendously. If society reflected an NFL team, we'd all be great."

Here's my response, published in the Denver Post today:

The Broncos aren’t ready for the season, and training camp won’t help.
The problem is they have a blindspot, and it’s not an issue at left tackle.
The blindspot is a head coach who can’t see, and it’s not because he’s in his sixties and in need of a new glasses.
Vic Fangio believes the NFL has “no racism at all.” He claims there’s no discrimination in the NFL’s meritocracy. Yet, it’s shocking to believe Colin Kaepernick doesn’t have a job because his athletic skills don’t merit one. It’s equally shocking to imply few Black men have worked hard enough to “merit” a coaching position.
Coach Fangio quickly issued an apology after social media erupted in criticism over the insensitive remarks. Yet an apology doesn’t change his mindset. And the words he used simply reiterated his ignorance: Fangio said there is “no color in the locker room.” But his locker room is filled with color, and players can’t just take off their skin color like they do a uniform. For a leader to refuse to see his players’ racial identity means he also refuses to acknowledge the challenges Black men face every day.
Athletes know strength and change come through hard work and training. A team meeting won’t fix coach’s ignorance. Pledging to “listen” to players won’t change his mindset when he refuses to see their racial identity. Diversity and equity training is now every bit as important for the Broncos as sprints and out routes.
Fangio may be a veteran in the NFL, but he still has much to learn about the league. His players and the Broncos will benefit from his education.

Racism and discrimination are real and persistent threats in contemporary society, and it is not enough to not be racist -- we must be anti-racist. And we must see and acknowledge the presence of race and color in our lives. For white people that includes moving past the belief in a colorblind society to an acknowledgment of systemic, or institutional, racism, and the existence of White Privilege. Diversity and equity training is a valuable, if not indispensable, part of being anti-racist and taking an active role in breaking down the history of injustice based on race. I have benefited and grown through my profession taking an active role in working with people like Glenn Singleton and the Pacific Education Group to learn about the issue and to "do the work," which includes a willingness to have courageous conversations.

If you are interested in engaging with this topic, a good place to start is this book:

Posted by mmazenko at 2:35 PM No comments: