Are "College & Career Ready" the Same Thing, or Can It Be Either/Or

In the endless debates about Common Core State Standards and PARCC/SB testing and teacher accountability and student accountability and education reform and "fixing public schools," every voice seems to focus on the importance of making sure students are "college and career ready." The implication is that schools, especially high schools, need to be preparing students for both options. However, I am wondering if at times those ideas might be at odds with each other and mutually exclusive. That was certainly one embedded implication of the Harvard-led report Paths to Prosperity. And that seems to be the general consensus of the rest of the world - in education systems that often "outpace us" on PISA tests - where students generally separate onto either a college or career path between the ages of twelve and sixteen. It's like the opening decision in the game of monopoly - Do you choose college or career?  Joanne Jacobs writes about the discussion of "Success paths for all," where she links to several articles on the ideas of common foundation skills and the ideas that "multiple pathways can better serve" all students.

And to further complicate the situation, Valerie Strauss reports on a school canceling the kindergarten's play for the spring in order for the kids to keep studying to become "college and career ready." It's no joke, and the thought of this makes me positively ill. Earlier this year, I attended a public education forum in which a principal/founder of a K-3 charter school was actively promoting the idea of being "college ready." I, of course, questioned him a bit about this emphasis, and he reasonably talked about teaching to a population that almost never thinks about college … for any of its kids. So, there is value in presenting that goal - the same goal that most middle and upper class kids get almost without thinking. But the downside of emphasizing college to five year olds is the justification for canceling recess and the arts and anything other than math/literacy instruction in order to send all kids to college. And that is a problem.

Granted, I understand the need to emphasize to students and families the long term benefit - and earning power - of a bachelor's degree. But perhaps, rather than simply saying that we need to make all kids "college ready" because college grads earn more money, we should instead focus on reforming society and the marketplace so that non-college-educated, but still motivated and skilled people, can earn a decent living.

Thomas Picketty has some ideas about that: 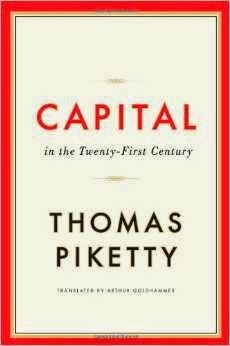