For those who are heading to the High Country this fall break or through the winter, and who might be hoping to enjoy a tasty, malty, hoppy beverage while there, the town of Breckenridge welcomed a new brewery to town last year with the launching of the Broken Compass Brewery. The brewery, which had an unofficial opening over Memorial Day weekend, is fully operational now after hosting a grand opening during the last weekend of May. The owners celebrated with a tasting party that was offering generous two-ounce+ pours of six featured beers, including a very sippable Coconut Porter, a couple deep rich coffee and chocolate stouts, and an innovative Chili Pepper Ale. 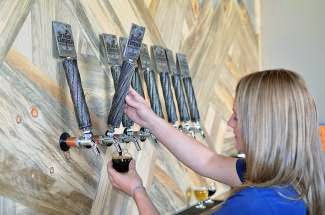 The Broken Compass Brewery is located outside of Main Street, Breckenridge, and so patrons will need to take the quick two-minute drive down Airport Road. There they can join co-owners Jason Ford and David Axelrod, who are affectionately known around town by their beards, and enjoy some truly innovative beers the reflect the spirit of life above 9,000 feet. It is truly a labor of love for these men, and they would be happy to show you around the brewery while talking about the process of fermenting barley, wheat, and hops. They are simply happy to create a product that will appeal to their customers. And if they can sell somewhere between 500 and 2000 barrels a year, the effort will be worth the time.

For beer drinkers in Breckenridge, it's worth stopping by, having a few cold ones, and perhaps taking home a growler or two.