Visiting the Kirkland Museum in Denver

As part of my son's fourteenth birthday (and Shakespeare's b-day and 400th anniversary of his death), we took the light-rail into Denver yesterday to take advantage of the Open Doors Denver program. Dozens of historic and significant Denver sights are open to the public for one day to encourage people to investigate the rich culture of the Mile High City. After a nice brunch at the Mercantile in Union Station and a casual stroll down the Sixteenth Street Mall, we made our way over to an open day at the Kirkland Museum, which is soon moving to a new Denver locale. Our excursion proved to be a most valuable experience, for I was not familiar with this unique and somewhat iconic figure of American abstract expressionism.


Quirky is good. With so many art museums nationwide drawing from the same playbooks, a numbing homogenization has set in, as they too often race to show the same artists and play copycat on many fronts, including the way they exhibit and interpret the works on their walls. If you've seen one recent exhibit of Chinese contemporary art, for example, you can pretty much predict how the others will play out. But the Kirkland avoids that trap. Perhaps because director Hugh Grant is not a museum curator by training, there is a refreshingly unbridled, free- form approach to everything the Kirkland does. He does things the way he sees fit and is not always looking around to see if his approach conforms to what every other gallery in town is showing. Be yourself. The Kirkland does not try to be all things to all people. It has established a few well-defined areas of emphasis for itself, and it hews to them. It hopes to spark visitor curiosity with at least one, but it simply accepts that not everyone will be interested by what it has to offer. In fact, children under 13 aren't allowed in, ever. While the spotlight on the decorative arts springs from Kirkland's own collecting in the field, the museum's more recent foray into Colorado art derives from discerning a gap in what other area institutions are doing and shrewdly and aggressively acting to fill it. 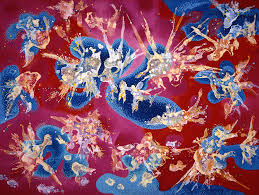 As part of my intent to start living the life I've imagined, I want to spend more time and energy exploring the world of art and culture. Last month, I visited the Museum of Modern Art while in New York with a school group, and I was not only captivated by the art, but I was thoroughly educated in the area because I visited with an artist, our school's Fine Arts coordinator. Seeing the MoMA through the eyes of an artist was one of the most inspiring cultural moments of my life.

I need more of that.