I recently began referring to myself more regularly as an "Altonian" after I took a class about race, ethnicity, education, and identity. The inclination was heightened a bit after I spent a bit more time in Littleton and Arvada and Golden, a few foothills towns outside of Denver, where I realized I just felt more at home, or at least nostalgic. Those little communities just seem familiar in a comforting way. And part of those feelings led to a simple bit of travel writing I was trying out. While I couldn't get any publications interested in the feature, I did recently publish the full piece on Medium.com.

Located at the foot of massive limestone bluffs running alongside the ole Miss’, Alton has been home and host to giants of all sorts. Robert Wadlow, at 8 feet 11.5 inches the tallest man to ever live, was known far and wide as “Alton’s Gentle Giant,” and the River City is also the birthplace of jazz legend Miles Davis. Visitors to Alton can appreciate statues of both these icons, with the Miles Davis statue located in the downtown area on Third Street and the colossal life-size Wadlow statue in North Alton on the campus of Southern Illinois University’s School of Dentistry. The loftiest of monuments to the giants of Alton, however, is reserved for Elijah P. Lovejoy, an abolitionist writer who is considered by many to be the first casualty of the Civil War. And that historical connection of Alton is just one of myriad reasons to visit — it’s a small town with big stories. 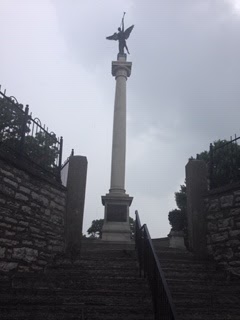 wow! Great Information you shared. Special thanks for it. If any one need Typist. Please check my Gig on Fiverr Typing Job