HOWL, and Sound Your Barbaric Yawp

"The spotted hawk swoops by and accuses me—he complains of my gab and my loitering.
I too am not a bit tamed—I too am untranslatable;
I sound my barbaric yawp over the roofs of the world." 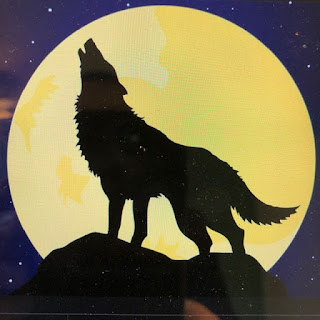 Have you heard the howling lately over the rooftops of Denver, or where ever you may be? It's not your imagination, and it's not (yet another) sign of the apocalypse or a rising up of the animal kingdom to take back the world. But it is howling. It's literal howling, though not from the usual suspects.

It's the sound of the city howling -- every night at 8:00 PM, people are heading to their yards or balconies or sidewalks or windows to let out a vigorous howl of utter primal urge ... and perhaps you should, too. As reported by Danika Worthington of the Denver Post, the coordinated howling is the work of two members of the Denver art scene who started a Facebook Group "Go Outside and Howl at 8:00 PM," which has grown to nearly a half million members from Denver to Switzerland to Brazil. Their reason: "what better time to howl than in this time of isolation?"

The practice of howling in the animal kingdom is communication, and it often has a communal aspect, (as anyone with a dog or in a neighborhood with dogs can attest. And, interestingly it actually is seasonal and, at least anecdotally, it can coincide with the full moon, which we just happen to be experiencing right now with the biggest super moon of the year. There is no doubt that something like a howl and primal scream or simply a yell has a cathartic aspect to it -- it can feel really good to just let go verbally. And, there is no doubt a literary or artistic tradition in America to the howl, as can be seen from 80s pop music back to the bard of American literature, Walt Whitman.

Many years ago, I recall watching an episode of the quirky 90s TV dramady Northern Exposure, in which the local DJ Chris Stevens introduced me to the idea of the howl, or to use ol' WW's term, "the barbaric yawp."  Chris, who often used his show "Chris in the Morning" to read from some classic literature, was reading from Whitman's Song of Myself, and he encouraged the residents of Cicily, Alaska to embrace their inner animal and howl or sound their yawp. I believe the concept of the howl or yawp also came up in the 90s literary film Dead Poets Society.

The last scud of day holds back for me;
It flings my likeness after the rest, and true as any, on the shadow’d wilds;
It coaxes me to the vapor and the dusk.

I depart as air—I shake my white locks at the runaway sun;
I effuse my flesh in eddies, and drift it in lacy jags.

I bequeathe myself to the dirt, to grow from the grass I love;
If you want me again, look for me under your boot-soles.

You will hardly know who I am, or what I mean;
But I shall be good health to you nevertheless,
And filter and fibre your blood.

Failing to fetch me at first, keep encouraged;
Missing me one place, search another;
I stop somewhere, waiting for you.

-- Walt Whitman, Song of Myself