Print journalism, especially daily newspapers in major cities like Denver, continues to face financial pressures, and the industry needs a sugar-daddy, as opposed to the parasitic vampire hedge funds like Alden Capital that are currently buying up and gutting the Fourth Estate. As tech companies like Google and Facebook have exploited communications laws to make billions off a product they don't produce, and as print readers continue to decline, newspapers have struggled to maintain staff and resources. And at this point the billionaire philanthropist seems as good a savior as any.

Granted, some skeptics are critical of billionaires like Jeff Bezo buying the Washington Post, for they fear a compromises in journalistic integrity and interference in candid investigative reports on corporate America. While those concerns are certainly valid, the situation seems to be working well so far, and ownership of the WashPo by Bezos is definitely not worse than ownership of the Denver Post by Heath Freeman and his cronies at Alden. Regarding Bezos, I tend to view the situation more like Andrew Carnegie deciding to use his fortune to invest nationally in libraries. Perhaps he also wanted to control what people read and might have corrupted the process of which books to acquire and which to forbid, but there's no evidence of that, and the benefit of the libraries is undisputed.

And, of course, Jeff Bezos and WashPo is not the only story; billionaire Patrick Soon-shiong also saved a newspaper by buying and supporting the Los Angeles Times when it was facing insolvency and predatory interest from hedge funds. Someone with deep pockets and who doesn't have to worry about pinching pennies to turn a profit can free up a newspaper to do the important work of reporting and writing without the stress of financial spreadsheets (except those of companies and politicians who might not like the spotlight). Another model which frees papers from the conundrum of bottom-line profits is the non-profit model utilized by The Salt Lake Tribune. The non-profit approach was envisioned and ultimately implemented by wealthy owner Jon Huntsman, and to this point it has proved to be a viable business practice. Of course, strong support from the community has played a key role as well.

Print journalism is the life's blood of a democratic republic, and there are two important truths to the situation:  newspapers are in need of deep-pocket investors who will support and grow the business, and there are plenty of billionaires who could make a Carnegie-style philanthropic impact on a society in desperate need of authentic news coverage. So, if anyone could put me in touch with some billionaires like Bill Gates, Warren Buffett, Elon Musk, Phil Knight, Ken Griffin, Philip Anschutz, or even some altruistic investment groups, then please let me know. We need a campaign to save journalism. 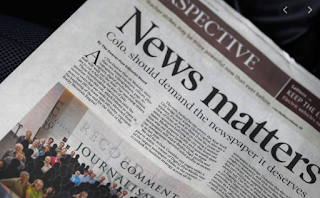 For more insight, check out this article on Stewart Bainum:
A resident of Chevy Chase, Md., just outside Washington, Mr. Bainum has had The Sun delivered to his home for years and began to worry about the paper as its print edition grew thinner over the years, said Jim Friedlich, the chief executive of the Lenfest Institute for Journalism, the nonprofit that owns The Philadelphia Inquirer. Mr. Friedlich added that he first discussed the newspaper business with Mr. Bainum in a Nov. 10 Zoom call.
Posted by mmazenko at 11:16 AM