Maybe They Should Study Art History in College

My college-age son is a true GT kid and math freak of nature who took AP Calculus as an eighth grader. Yet, he chose a college that provides a liberal arts emphasis to feed his soul as much as his mathematical mind. And while he will ultimately major in math and comp-sci, he is currently taking a rich and diverse course load for his first three semesters. My fifteen-year-old daughter is a different human altogether, and as we discuss possible colleges and career paths, I am happy to steer her toward the liberal arts. She's leaning toward a communications and media/journalism focus, with the possible path toward law school as well.

As the humanities continue to take it on the chin from myopic thinking and bean-counting market forces, I took a look at the study of the liberal arts for my column in The Villager:

Maybe They Should Study Art History in College

On January 20, 2021, a University of Delaware graduate who was a history and political science major with a minor in English became the forty-sixth President of the United States. That background would make Thomas Jefferson and our Founding Fathers proud, for they believed deeply in the power of a classical liberal arts education. In fact, the liberal arts were the primary focus of early higher education among those great men in order to create knowledgeable leaders who were also deep thinkers. Senate Minority leader Mitch McConnell, a political science major, would most certainly agree.

In recent economic downturns, as liberal arts programs have continued to lose funding, the nation has pursued a new focus in higher education, and it will be to the detriment of our national identity. Colleges are cutting majors mostly in the liberal arts to focus primarily on STEM careers and basic utilitarian job training. But we go to college for more than just job skills; we study to become fully actualized human beings. And the liberal arts are more useful than many might suspect. Carley Fiorina, former CEO of Hewlett-Packard and GOP presidential candidate, studied medieval history and philosophy. John Mackey, the founder and CEO of Whole Foods, majored in philosophy and religion.

In 2015, Fareed Zakaria wrote In Defense of a Liberal Education, which basically explains why we study what we study. It’s about being a well-rounded, educated person. I often explain that to students after they ask “When will I actually use geometry or poetry or knowledge of the mitochondria?” The blunt, honest answer is probably never, but they will use the well-developed critical thinking brains they have for learning those things. For, education is not simply utilitarian, which is an argument we’ve been having since Charles Dickens wrote Hard Times. We don’t just teach what you’ll need for a job because education is not job training.

However, as the costs of education, especially higher ed, have soared, we’ve become more critical and narrowly focused on jobs and career skill-based education. In reality, employers often just use diplomas as a screener for jobs to identify educated people who have the persistence to complete degree programs. And this can be a problem. In the rise of a tech-STEM world, the liberal arts lose favor, though the skills and knowledge they offer are integral to all the other fields. Sadly, the necessity of a bachelor’s degree and the question of utilitarian focus in education have also become politicized.

In 2015 President Obama quipped, “I promise you folks can make a lot more, potentially, with skilled manufacturing or the trades than they might with an art history degree." And in 2019 Senator Marco Rubio said “we praise four-year college degrees but look down on technical certifications; we count ridiculous classes on pop culture as credits toward college degrees, but not wood shop.” Sadly, while trying to promote the trades, they needlessly knocked down the liberal arts. And a side-effect is that some business leaders and politicians have hinted we shouldn’t fund the liberal arts, and that students should only be given college loans for engineering or nursing, but not literature or music or social sciences. That would be a cultural and societal catastrophe.

And if that doesn’t convince you, then consider these people. Andrea Jung, the head of Neiman Marcus and Avon, focused on English literature in college. Sue Wojcicki, the first CEO of YouTube eschewed business and computer science in favor of history and literature. Coloradan Steve Ells, the founder of Chipotle, was an art history major, as was Michael Lewis, the author of books like Moneyball and The Big Short. And finally, Steve Jobs, the visionary tech genius, credited his study of the humanities at Reed College for the unique brilliance of Apple computers. 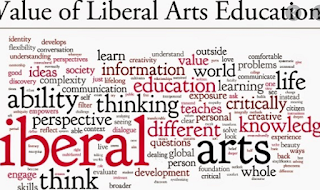