Nike is undoubtedly the running shoe behemoth, and it has been since the 1970s when Phil Knight hooked up with the running coaches at the University of Oregon and Stanford and began peddling more structurally padded shoes. The effect was the launch of a new industry and fitness craze, as jogging entered the lexicon, and Nike shoes became the apparel of choice. In recent years, elite running has steered away from the mainstream companies, and pure runners have gravitated toward shoes with less obvious structure and a style that mimics the foot in its natural form. With it came the rise of the barefoot running craze, greatly influenced by Chris McDougal's excellent sociological work Born to Run, which gave rise to barefoot-running "shoes" like the Vibram Five Fingers.

Now, Nike is playing catch up. 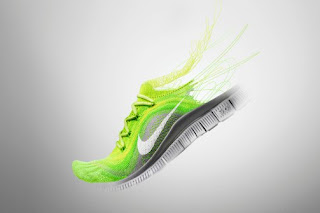 The release of the new Nike Free Hyperfeel Flyknit is certainly a hype-worthy story, as it is an incredibly paired down running shoe crafted from a single piece of fabric.  The story has been profiled by both Wired Magazine and the Daily Beast, and each comments on the attempt by Nike to remain relevant in a world that may be moving away from Nike's MO of padding and supporting the foot as much as possible. Kyle Vanhemert takes particular notice of Nike's efforts commenting on how Nike Jumps into Barefoot Running. Vanhemert  sees this shoe as the new direction of Nike, and it's likely that may be true if the shoe company hopes to stay relevant. In a slightly more entertaining expose of the Nike Empire, Winston Ross reports for The Daily Beast on a revered trip Inside Nike Headquarters. The story of Uncle Phil and his company's attempt to deal with the pendulum swings between shoes offering more and less support subtly mocks the hallowed ground in Eugene, even as he offers a compelling account of the roll-out of Nike's new shoes.

As far as the actual feel and performance of the shoe, it is said to be somewhat like "wearing a sock," clearly an indication of the single fabric construction and connection to barefoot running. At $160 a pair, this is not a shoe for the casual runner, and it may not be for everyone. Certainly, there is no reason to believe this shoe is a necessary purchase for someone who wants to revert to less structure and more natural and barefoot-style running. In fact, it's not a stretch to say that anyone in nearly any shoe can "run barefoot while wearing shoes."  In reality, barefoot running is all about the gait and not really at all about the shoes.  The key is to run, as if sprinting - or as McDougal says, "like you would if you had to chase a toddler into the street while in bare feet." Basically, natural runners land on the balls of their feet, not the heels.  The heel strike - and the potential damage and wear/tear - results from the more padded shoes of the past thirty years that allowed runners to land on their heels. That's not what a runner should do.

And, if a runner wants a bit of protection - especially for street or trail running - the thin barefoot-like shoe doesn't have to be Nike. For as Vanhemert implies, Nike is sort of late to this game. Companies like Merrel have provided barefoot shoes for years. Newton is another great low-structure shoe company and Adidas has some great styles as well.
Posted by mmazenko at 9:11 PM