LA Dodgers Falling Short of Bid to "Buy a Championship"

Though the West Coast is the origin of "Moneyball," the latest story on the influence of finances in professional sports comes with the attempts by Los Angeles teams to "pull a Yankees" and buy a world championship in major league baseball.  The policy has failed miserably with the Angels who have dropped hundreds of millions on underperforming superstars like Albert Pujols, CJ Wilson, and Josh Hamilton.  Those three, by the way, must be enjoying the surf in LA because they certainly aren't enjoying the league championship series.  And things are faring much better for the payroll-bloated Dodgers who now trail the mid-range Cardinals 3-1. Here's an interesting meme: 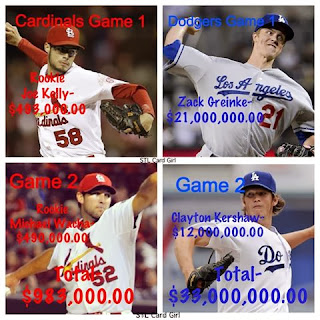 And one final note: Major League Baseball and TBS have made an atrocious scheduling decision to force LA and St. Louis to play Game 5 of the NLCS - which could clinch the pennant - on a weekday afternoon. What moron thought that was a good idea? Would, perhaps, some St.L fans who have jobs like to watch their team win the pennant?

Way to go, Bud. You screwed the pooch on this one.
Posted by mmazenko at 10:06 PM