60% of Americans have little-to-no knowledge of the new academic standards and expectations that are being implemented in nearly every state across the nation.  The Common Core State Standards are a new set of guidelines for academic expectations that were developed and implemented by a consortium of state governors, education researchers, and business-oriented foundations.  The goal was to guarantee some minimal level of grade-level competence for math and literacy with the intent that no child would be denied access to a quality college prep curriculum as simply a result of geography - i.e.. where he lives.

Of course, this is not without controversy. Conservatives and the GOP - when they're not busy shutting down the government to prevent the implementation of a law - are challenging the Common Core as an unnecessary and unconstitutional intrusion of the federal government into education, which is the business of the state. In fact, the Common Core is not "Obama-Core," as the current administration had nothing to do with drafting or implementing the standards. However, the feds have strongly encouraged adoption of CCSS by linking Race-to-the-Top and NCLB funding to it.

Other opponents are criticizing various components of the new standards, with the teaching of math being the biggest target.  Common Core alleges to move children "beyond computation" to guarantee students understand math on a "conceptual level." However, the practice of that is upsetting many parents and kids, and this issue most recently raised its head with the posting by "South Dakotans Against Common Core."  As you can see in the homework below, a child is given almost no credit and the lowest grade possible because he doesn't display the "conceptual side" of 25 - 6 = 19. As he notes, "he found it out in his head." 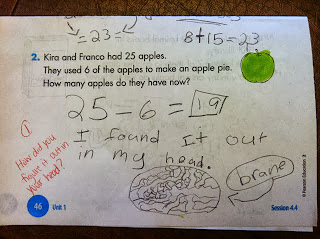 Certainly, there is a lot more to the issue worth investigating. And parents and students should have serious interest in understanding the Common Core.