Am I My Brother's Keeper?: Classical Liberalism, Conservatives, & the Communities We Need for the Stability We Crave

"Am I my brother's keeper?"

So asked Cain of the Lord, and considering the tone of God's inquiry and the status of Cain as basically the world's first murderer and representation of man's inhumanity to man, the answer is, well, yes, you are and should have been. That idea of a responsibility to our neighbors and our community has been on my mind lately, especially as it can seem at times as if we are falling apart as a nation at the very time we should and must be coming together. Conservative writer David French is truly concerned about the division, and certainly the protests in the street coinciding with a president who publicly espouses a mistrust of the institutions he's sworn to protect give us reason to pause and even fret. On the other hand, I still ground myself in faith for the country and the communities in which we live. And it's the value and importance of community that French identifies as really the hope to avoid a dramatic and even violent split in our society. Edmund Burke, the founding father of conservatism, called these units of community "little platoons," the traditional structures of society to connect us and build stability through community.
It's in these communities that we will find hope. David Brooks' recently addressed the role we play in the lives of our neighbors in his column "Two Cheers for Liberalism." Much of what has been happening in the late twentieth and early twenty-first centuries has destabilized and even decimated communities beginning with the family. From the marginalization of independent farms in rural American that practice the agrianism of people like writer and poet Wendell Berry to the dissolution of family neighborhoods in urban settings facing job losses that established a middle class living, we are as Charles Murray wrote "coming apart." From fading factory jobs to failing family farms, the instability in the economy has resulted in instability in the families and neighborhoods. Rampant drug use from the opioid epidemic in rural counties to the crack and meth problems ravaging the cities and suburbs, stability is at risk. Institutions create stability in society and the keys are the family, the church, the schools, and the local governments. That is why, as I tried to explain to an acquaintance recently, why she should pay taxes to support schools when she doesn't have kids in them. The stable community those schools provide benefits all of us.

The problem of a society and economy increasingly managed by companies like Google and Amazon is that while the profits benefit some, the net loss to communities exacerbates the problems we oppose and seek to mitigate. The self interest and monopolistic power of these companies have ultimately weakened the very communities which they claim as their consumers. Mike Rowe, a tireless advocate for the value of skilled labor, has pointed out that the tech industry creates millionaires among a select few who design the product, but that prosperity doesn't extend to those who build, transport, sell, and buy the products. A single fax machine is worthless with no one to connect to. That same idea can be extrapolated through so many of our innovations. The tech companies have similarly cannibalized the heart of the information industry that gave them so much of their content.
Granted, I grew up as a Gen X conservative in the Reagan Era of the 1980s when we all learned "Greed is good," or so Gordon Gecko so glibly pontificated in Oliver Stone's 1987 film Wall Street. We are driven by self interest and that does create progress and growth in society. But understanding and believing in the opportunities provided by the system of mixed-market capitalism under which the United States has thrived for so long does not mean endorsing extremes of behavior and ideology that have come to dominate political discourse since the mid 1990s. So, as the country struggles with its belief systems and extreme views about where the nation is heading, it's important to remember the stability that this country, with very little disruption, has operated under for so many years and to reject that quip from William Buckley. Yes, Bill, extremism in the defense of liberty is a vice. It's exactly the idea of extremism and radicalism that conservatism opposed and exists to counter.
In outlining his political philosophy Edmund Burke strongly opposed the radical anarchy and social disorder of the French Revolution. Most people feel the same way -- we value our communities and a society in which we can live safely and get up each day with the opportunity to thrive based on our individual actions and characteristics. Basically, we want to get up in the morning and know that the lights will come on, and people will drive on the right side of the road.  From Burke to Kirk, the value of stability in society and the institutions which establish it and maintain it are the primary focus and building blocks of a conservative mindset and the common national identify that connects us as one nation.
Yes, we are our brother's keeper. 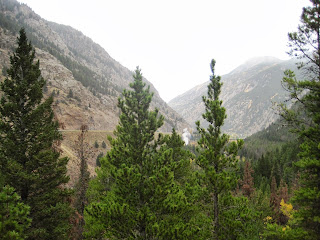