On November 6, 1987, just a few weeks after an epic stock market crash signifying the end of 80s consumer excess and portending darker more austere days to come, theaters premiered a flashy yet noir version of the teen film genre based on an even darker novel from a few years before. Less Than Zero, based on the Bret Easton Ellis book of the same name, was set in Beverly Hills where Yale student Clay comes home for the holidays. Set during the Christmas season, the film could aptly be viewed as a Christmas movie in the spirit of the hollow, empty materialism the day too often represents. This ain't a Hallmark film for sure. It is, however, "a very Gen X Christmas movie."

Here are some thoughts from my latest piece on Medium:

Thirty years ago, Clay came back to LA for Christmas, and the holiday movie was never the same. For Generation X, a group of people raised on disappointment, the cinematic version of Bret Easton Ellis’ novel Less Than Zero is a true Christmas movie exposing the hollow superficial excess of the holiday season and specifically the 1980s. A visually stunning film from cinematographer Edward Lachman, the movie captures and spotlights all the glitz of the holiday season, especially in Beverly Hills, while not looking away from the vacuous lack of substance behind the style, the holiday, and the state of the American family. Director Marek Kanievska created a haunting music video of a Christmas movie with film noir elements amidst the bright lights of holiday decorations. 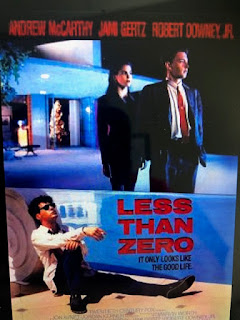