In the madness that was the Game-Stop rodeo this week, I texted a meme claiming to reveal the true identities of the traders who scammed Wall Street to my college-age son and several buddies. It was a pic of Dan Akroyd and Eddie Murphy from the poster for Trading Places. And, one of the more pop culture astute friends expressed ignorance of the image, saying "I know I should recognize this, but I don't." That quickly led to a discussion of movies these young men need to see as much for the entertainment as for the allusions. And I mentioned that I used to have a list of films which during the course of teaching high school, I would occasionally draw from, telling the male students these are movies that if they if they haven't seen them, "they are not yet men."

So, now I'm pondering exactly what I mean by that.

Many of the films were classic dramas centered on conflicts of battle and epic journeys and characters learning values like loyalty through the buddy relationships. Some leading titles are Butch Cassidy & the Sundance Kid, The Great Escape, Cool Hand Luke, and The Magnificent Seven. As I pondered what is was about these films and the characters in them that defined some vague essence of manhood, I recalled a scene from a completely different but equally special film at least for Gen Xers, Say Anything with Jon Cusack. At the record store with his two female friends, Lloyd Dobbler hears an important distinction: "Don't be a guy. Be a man." And when we hear that, especially in our more enlightened age of confronting the toxic masculinity and cheesy embarrassing machismo that often masquerades as manhood, we just know what she means. Don't be a guy or a dude or a bro when you can be a man.

It basically comes down to character, which is an equally ambiguous term to define, though we all seem to know it when we see it. I think of that platitude about integrity - it's doing the right thing even when no one is looking. Trust and loyalty are important elements as well, as well as a disciplined sense of self worth and a quiet but secure confidence in identity and beliefs regardless of the situation. Of course, these are all equally vacuous in really defining what it means to be a man. Interestingly, after texting with "the boys" as I call them, I turned on the TV and ran across the pivotal scene in a great film that is ubiquitous on cable; I'm talking about the night of Andy Dufresne's escape in The Shawshank Redemption. Yeah, I know. It's immediately recognizable, and we just nod. Andy Dufresne and Red. These are men.

Thinking about Shawshank led me to some other buddy films which are pivotal in my thoughts about manhood. Stand By Me comes to mind. The pathos in that film is practically palpable. And I just watched another entry in the buddy genre on Netflix now, a French film from 2011 called The Intouchables, based on the true story of a quadriplegic and his caretaker. It was a heartwarming and also pensive story about what it means to be alive and what it means to be a friend and what it means to be a man. Another film that popped into my head which is certainly a buddy story, but with a different tone is The Sandlot. I mean, come on, "you're killing me, Smalls."

So many great stories about male characters learning what it means to be a man. 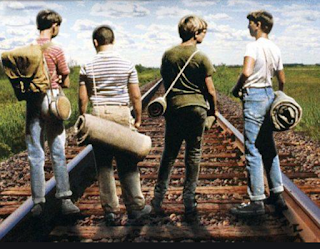