A Shot Clock is the Wrong Choice for High School Hoops

After last week's news that in the 2022-23 academic year, state high school athletic associations will be permitted to add a shot clock, I fired off a quick blog post opposing the decision for a variety of reasons. After an engaging and fun Facebook exchange with some friends, I expanded my post into my column this week for The Villager. Here are my extended thoughts:

I don’t think I like the idea of a shot clock in high school basketball.

That potential change to the game was announced last week by the National Federation of State High School Associations which voted to permit state associations to adopt a shot clock for the 2022-23 school year. This progressive approach to basketball will not be good for the high school game, and it's just one more example that traditions matter, often as a hedge against frivolous, unnecessary change. Games should not just be about speeding up and pursuing more shots for pure entertainment. There’s so much more to the game, especially at younger levels, and focusing on a quickened pace to force more shots to produce more scoring simply misses the nuanced beauty of the sport.

In addition to compromising the fundamentals of the game, the shot clock in the teenage game will also harm the competitive balance which is so important in high school athletics. While the shot clock has certainly enhanced the college and pro games, it will hurt the high school leagues and exacerbate imbalance among schools. Thoughtful pacing, ball control, and even the often dreaded "slow down game" are competitive strategies many schools use to their advantage. In the spirit of competitiveness, deliberate pacing is a necessary tactic that smaller schools sometimes need. And this measured approach is no less significant in terms of athletics than the advantage some schools have simply by nature of larger pools of kids.

States will each have to make their own decision on the need and benefit of a shot clock, and it's to be expected that coaches and athletic directors will weigh in. In some states like Kentucky, the discussion is already in full force, and there are strong opinions on both sides. The cost of installing and managing the clocks is the greatest concern for most schools, as the shot clock would be just another unfunded mandate that most districts can’t afford. And, while some coaches and fans believe the change will speed up the game and create greater excitement with higher scores, many others are vocally opposed, arguing it’s going to lead to a sloppier game as less experienced players will increasingly force up rushed shots to beat the clock. Additionally, as one coach noted, “I just think that a shot clock would negate some of the things that coaches do to close the talent gap.”

I’ve never liked changes that appear to fix what isn’t broken, and some people believe the shot clock decision is an answer in search of a problem. The high school game is fine as it is, and there isn’t a rash of slow games that will suddenly be improved with the addition of a hurry up offense. I love high school hoops, even when it’s a slow-down defensive battle. And, in those situations, a better option would be for more athletically-talented teams to figure out a way to break the slow down, like breaking the press. Playing smarter and more creatively could avoid needing a shot clock. So, teams should figure out a way to pressure the stall, force turnovers, tie up the ball, and steal a possession. These are all options, and coaches just aren’t thinking creatively enough to solve the problem.

Every sports fan loves the classic basketball movie “Hoosiers,” and most would point to it as an example of the thrill that comes from fast-paced games. However, those who know the history of the game also know that there’d actually be no movie and no story if not for the slow down tactics of the underdog team. In the real game, the athletically outmatched Milan High School team actually stalled and held the ball for more than four minutes in the fourth quarter, which allowed them to run the thrilling buzzer beater shot in the last eighteen seconds to win the state championship. This great sports movie only exists because there was no shot clock.

Ultimately, the shift to a shot clock will only succeed in giving an advantage to teams who already have one, and it’s not a change the game needs. Obviously we can expect that large schools and dominant programs which have a pipeline of top athletes to succeed at the fast-paced level will desire the clock. Smaller schools who use strategy to counter and control superior size and athleticism will certainly oppose the change. The question will be whose benefit is valued and supported by the state associations. Let's hope prudence and a thoughtful approach to what's best for the game are the key influences on the decision. 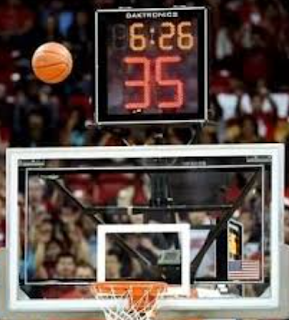