A little nostalgia, and perhaps some hope, in this week's column for The Villager. The front porch is meant to be a gathering place, yet for most people in most houses, it's simply ornamental.

My dad was a walker and a talker. For decades, he and his friend Tom walked our subdivision each morning. They kept an active pace in both their steps and their conversations, and they’d often wake the neighborhood as they chatted and argued about everything on their minds from family stuff and local news to international business and politics. A conservative Roman Catholic Republican sparring with a liberal Protestant Democrat, they never resolved much of anything, but both men knew they were better off for the walk and the talk.

I’ve thought of them often over the years as I’ve picked up the habit of walking various routes near my home. Beginning last February, the pandemic and quarantine led many people to begin strolling their neighborhoods and seeing their communities in new ways for the first time. The numerous paseos and pathways throughout neighborhoods in southeast Denver allow great views, not only of open space and the natural world, but also cozy front porches and comfortable back patios. Yet, many of the walkers also notice something else. The porches and patios are all empty. Where are all the people?

In 2000, political science professor Robert Puntman published a book called Bowling Alone: America’s Declining Social Capital. His research exposed the changing nature of American communities at the turn of the millennium that were, sadly, no longer communities. They were just a collection of houses. Over the past fifty years, America has seen a noticeable and documented reduction in nearly all forms of in-person social interaction and discourse. Putnam believes that the loss of the human connection -- the kind which comes from neighbors walking together and meeting on front porches -- undermines and weakens the necessary personal engagement that is fundamental to a democratic republic. The current political climate in the United States seems to validate his concerns.

When I was growing up in southern Illinois just outside of St. Louis, my subdivision was a cross-section of our community. In the houses on the street where I lived with my journalist mother and personnel director father, we had two doctors, two engineers, a police officer, a university administrator, some teachers, a phone company worker, small business owners, contractors, carpenters, and numerous skilled laborers including factory workers. All lived in the same subdivision of roughly two-thousand square foot houses. Their kids all swam in the same community pool, attended the same local schools, and played numerous sports in the same rec leagues. Their parents were in community organizations like Rotary together, and they participated in the same PTCO.

I grew up attending regular, sometimes weekly, porch parties at my grandmother’s house, where the adults sat and chatted while listening to Cardinals games on the radio, as the kids ran around the neighborhood, catching lightning bugs as the evening settled in. I recall hours of sitting on our front porch in the summer, looking to the southwest as Mississippi River Valley thunderstorms moved in. Watching the lightning, listening to thunder, we’d occasionally have some neighbors join us on the porch if they were on our street when the skies unleashed a gully washer. The front porch offered refuge from the storm in more ways than simple shelter.

Granted, these memories are viewed through the rose-colored glasses of nostalgia. Clearly that type of living arrangement is long gone and never coming back. Yet the loss of interconnectedness is unhealthy for any society. The social fabric that connected people to each other for so many centuries is fading in contemporary America. While critics and pundits talk about the spectre of socialism or facism, the real crisis in America slips by unnoticed as few people know their neighbors anymore.

When Alexis de Tocqueville explored the magic of America, he coined a phrase social capital to describe the civic engagement that was the essence of community. When we don’t know our neighbors, and when our neighbors are only people who have the same lived experience, something important is lost. In 2020 Robert Putnam and Shaylen Romney Garrett published a second book called The Upswing: How America Came Together a Century Ago, and How We Can Do it Again. Perhaps one way we could come together is to be out on our front porches again, connecting with neighbors and building communities.

My porch is small, but my wife and I are out there often, and all are always welcome to stop and sit for a chat. 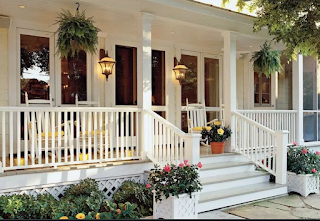