While the term young adulthood has been around since the early nineteenth century, the term YA to designate a specific genre of literature is a relatively recent innovation. While many authors over the past two hundred years wrote about and even toward the age of adolescence, it was really the 1980s that the genre came into its own. Iconic writers such as Beverly Clearly, Judy Blume, S.E. Hinton, and Cris Crutcher played a key role in the market. And, granted, while some books such as Salinger's Catcher in the Rye or Twain's Adventures of Huckleberry Finn or Lee's To Kill a Mockingbird weren't written with a teen audience in mind, they certainly grabbed the attention of young people by offering authentic narratives

And now, because we have an obsession with lists and rankings, Time Magazine has published a list of The Best 100 YA Novels of All Time. And like all lists, it's a bit problematic.

Obviously, any lists or claims about works being "the best of all time" will always generate disagreement and about what is on or not on the list. Such judgments are always subjective. However, my primary problem with Time's list is that nearly forty of the one hundred works were written in the past five years. That is, quite frankly, ridiculous, and it really casts doubt on the credibility and the agenda of the panelists who made the list, two of whom have their own books on the list. I mean, I'm sorry to counter, but there is simply not enough time to truly gauge these works. Sure, they are timely and significant in the zeitgeist. But to be the best of "all time," you really have to stand the test of time.

And, let's be clear: any best of list for YA literature that does not include a single work from the Harry Potter series by J.K. Rowling is egregiously remiss. Rowling's story of the young wizard with the lightening scar on his forehead is undoubtedly one of the largest and most significant publishing events in the history of written English. To exclude these works would seem to be not an oversight or simple preference but instead a political statement, and a rather disappointing one at that. And, truly, the work The Outsiders by S.E. Hinton is a YA novel that is almost as timeless and significant as Salinger's story of Holden Caufield or Golding's description of the battle between Ralph and Jack. In fact, many writers and critics believe that Hinton's first novel, published when she was just eighteen, can be considered the book which launched the contemporary age of YA fiction. To exclude this work from a "best of" list is aloof at best.

So, while I am a long time subscriber of Time Magazine, I have to say I am rather disappointed that this story and list ever made it past the editors. 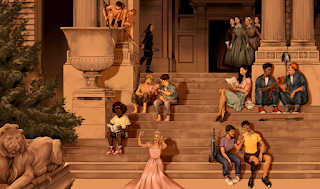