Fouls: That's Why Lebron can never be the GOAT

Lebron has fouled out of NBA games a total of eight times in his sixteen year career. Anyone who watched the recent conference championship against the Denver Nuggets knows that should have been impossible with the way Lebron plays, pushing off and running over any opponent around him. He has done this for years with near impunity. Sir Charles Barkley knows, and he was the only voice on the NBA on TNT team who was willing to call it out.

"That's a charge. Come on, man. That's a charge," Charles pointed out during clips, all to the eye rolls of Shaq. Of course, Shaq was able to push his way around the lane to a Hall of Fame career; so he's not going to accept the complaints. But Kenny and Ernie should have agreed because it's just so blatant. And I am the first one to dismiss anyone who says "the refs cost us the game." I literally don't believe it. But as Charles conceded, in the last two games "the refereeing was terrible."

The fouls are why I just can't ever really cheer for or appreciate or acknowledge Lebron the way he deserves. I just don't really like him as a player. And it's why I'll never concede to him being "the greatest basketball player of all time." No way. And that's a shame. Lebron is better than this kind of behavior. He not only pushes off almost every time down the lane, but he is, pardon me, such a prima donna that he complains all the time about the fouls he didn't get. That's just kind of disappointing.

Granted, there is ample evidence for the NBA refs' "superstar treatment." We know all the times a star is in the late stages with three or four on him, and a foul happens, and the stripes know to look for the closest non-star to tag with the foul. It's an unwritten rule. Heck, Michael Jordan fouled out only ten times in his career - four of them in his first season. And Luc Longley picked up a lot of fouls that Michael committed. And, really no one will dispute MJ fouled Byron Russell on that iconic last shot of his career.

But Lebron James? Oh, my. I have never seen it taken to this level. And his being 6 foot 8 and 250 pounds is a, pardon me, big part of it. Lebron is a great basketball player who, in my mind, has tarnished his legacy with really sloppy play that doesn't really require much talent. It just takes size and a reputation as untouchable. 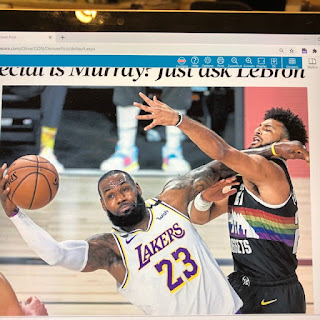