Wait on SCOTUS for the sake of the "United" States

I wish this could have waited a week. Ruth Bader Ginsburg deserved at least that much. On the passing of this iconic American, the better angels of our nature should have allowed us the simple restraint to not talk about and fret about and begin shouting about her replacement on the Supreme Court. The basic virtues of honor, respect, and decency should have led us to mourn and to reflect on the life and legacy of woman who means so much to so many. Alas, we couldn't do that as a nation, and it didn't take long for the Senate Majority Leader to indicate his intention to fill the court vacancy without delay, an action that was disappointing and inconsistent at best. Yet here we are.

All eyes are on Senators Susan Collins (Maine), Chuck Grassley (Iowa), Lisa Murkowski (Alaska), Mitt Romney (Utah), Cory Gardner (Colorado) ... and I will throw in there Ben Sasse (Nebraska). It's not worth mentioning the other two pivotal senators who are nothing less than shallowly hypocritical.

And, so here in Colorado, it's important to note that Senator Cory Gardner is correct in that it his right and his responsibility to "advise and consent" to presidential nominees to the courts. While his statement is tainted by his previous position with regard to "the Biden Rule" on the nomination of Merrick Garland by President Obama, he is within his right to do so because, to use Obama's words to Republicans in 2013, "I won. Deal with it." And it's worth noting that this politicization of Supreme Court nominees didn't really start with the Republicans blocking Garland or planning to reverse their principles and install RBG's replacement. It goes back to the nomination of Robert Bork in 1987, a qualified jurist who was unjustly blocked from a position he should have been appointed to because of ideological opposition from a Democratically-controlled Senate.

Politics and party platforms and ideologies and predictions about how a jurist will rule on some hypothetical court case in the future should not be part of the discussion of a court nomination. The Constitutional guidance is simple:  advise and consent. Robert Bork and Merrick Garland and Neil Gorsuch and Brett Kavanaugh were all qualified jurists who should have been appointed to the Supreme Court. Only two were. And that is the problem I am calling upon Senators Gardner, Sasse, and Grassley to help repair. The political angst and animosity in the country is not good for our union, and it's heading in the wrong direction. Nominating and installing a new Supreme Court justice prior to the inauguration in January would be harmful to our fragile unity. And so, I am asking these men to do what is best for the country, not for their party or their own office.

Truly, I would like to see a true Constitutional change to the Supreme Court in the ending of lifetime appointments. The country will be better off if we can remove the immense, disproportionate, and unseemly political significance of The Court. It would be better if justices were simply appointed to single ten or fifteen year terms and then done. And whenever the vacancy comes up, the president nominates and the Senate confirms based on one simple criteria: a qualified jurist. De-politicizing the Court would be a way to avoid what will be the obvious and even politically necessary response from the Democrats the next time they control the White House and Senate (which could be in January):  They will end the filibuster and add three or even four additional judges to the Court.

That would be an outrageous but somewhat understandable response if Senate Republicans force their hand. Optimally, it would be three seats to create a even numbered court; for ties would perhaps lead the court toward greater political neutrality.

Regardless, none of this should happen. For the sake of the country, let the first and foremost conservative value of prudence rule the day. Let's wait, together, until after the election. 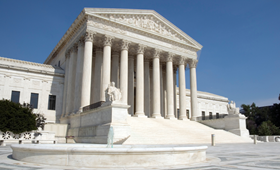