So, in another entry about the abysmal state of infotainment in political talk show commentary that is literally hurting America, I have to say I'm as disappointed in Ben Shapiro of the DailyWire as I am in Tucker Carlson of FoxNews. Their schtick represents a genuine emptiness in both Gen X and Millennial conservatism, and that's a real shame because they are both smart, well-educated men with a gift for commentary. It's their choice of subject matter that lacks depth and authenticity. Case in point - these recent Tweets from Shapiro:
Now, on a purely logical and rational basis, and in a theoretical sense as well, I agree with the insinuation about President-Elect Joe Biden's nomination of Pete Buttigieg for Secretary of Transportation. I don't believe he is qualified to lead that department, certainly not like the current secretary Elaine Chao. And I don't believe Mayor Pete is the best choice for that role. Of course, I understand the politics of building a cabinet and the often dubious nature of the word "qualified" for some of those positions. I think Pete Buttigieg is a brilliant young man who has an impressive education and record of professional experience. And I think he is a skilled politician who will bring an important voice and degree of insight to the Biden Administration. Truly, in terms of patronage jobs, I think an ambassadorship would have been a great role.
But what about the politics of Shapiro and his denigration of Biden's picks?
The problem is the inconsistency of the standard from which he's criticizing. If Shapiro hadn't been silent for the past four years in regards to the qualifications of cabinet members, he might be pursuing a legitimate line of debate. And it's an interesting and important discussion to have. But he has been silent and complacent even when equally or more egregious appointments of unqualified people for cabinet posts have been conducted by the Trump Administration and the McConnell Senate. So, obviously Shapiro doesn't really care about cabinet posts and qualifications or experience in those roles. Thus, his current line of social media attacks and podcast rants simply emphasizes how he's really just a political hack trying to score points, views, and hits on social media. And again, like with Tucker Carlson, that's a real shame. We need to be better than this. And both Shapiro and Carlson are smarter than that. Sadly, they remind me a lot of the kid I was at eighteen, talking big politics with mostly bluster in my briefcase. And, that's the problem -- they've never grown beyond that.
And, as I've written this, Shapiro tweeted again about Trevor Noah and Stephen Colbert interviewing Obama and Biden, and we're right back where we were in 2004 with Tucker in the Crossfire. Shapiro ironically notes he is "happy our age of entertainment-first politics is drawing to a close." In fact, he is just another textbook example of entertainment-first infotainers who obfuscate issues and genuine debate or discussion in pursuit of ratings, money, viewership, and, of course, power. Truly, as I noted before, I believe both sides are hurting America, and the Don-Lemon-Rachel-Madow-Lawrence-O'Donnell versions are every bit as deleterious as the Carlson-Ingraham-Hannity-Shapiro lane. And, really, if we want to talk qualifications or experience, does Ben Shapiro truly feel justified in challenging and criticizing people like Buttigieg? He shouldn't. And he ought to be a bit embarrassed by his attempts to demean a rather successful and influential politician. The four-year-old playing with trains comparison and the college dorm reference were just silly. That's not quality commentary; it's simply juvenile hectoring.
The tradition of conservatism running back to Barry Goldwater and Russell Kirk deserves far better than what Shapiro and Carlson are selling to audiences today. And that is hurting America. And it is a real shame. Let's hope someday, Shapiro and Tucker Carlson will stop following the legacy of media clowns like Morton Downey Jr., Rush Limbaugh, or Sean Hannity, and will instead look to conservatives like David French, Jay Nordlinger, David Frum, and Ross Douthat for guidance on generating reasoned, rational arguments that promote positive discussion. 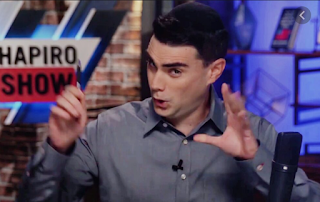