Is the World Causing Learning Disabilities?

I've been in education too long to not wonder whether our technological world is a factor in, if not the outright cause, of many learning disabilities we see in far too many young kids. Granted, there is a strong argument that these disabilities have always been present, and society is simply getting better at identifying, diagnosing, and accommodating for them.  From dyslexia/dysgraphia to ADD/ADHD to processing speed disparities to anxiety and more, there is no doubt that every year it seems more kids struggle with learning from conditions that literally inhibit them from accessing curriculum and learning on a level playing field.

I think a lot about cognitive psychology and its ability to explain what is going on, and when I think about cog-psyche, I always think about Dan Willingham, who has taught me much about how people learn and the importance of core knowledge in building brain development. The simple truth for me is there is very good reason that the American Academy of Pediatrics recommends zero screen time for kids under the age of two, and for no more than thirty minutes a day until the age of six. The negative impact of these blue-LED, two-dimensional light shows on young brains is just not a good idea. And truly, it doesn't seem like anyone legitimately says such tech is a good idea -- at least not since the days the mother who parked her baby in front of the TV for hours at a time, and made millions off of what could only be a truly unsettling lack of parenting. The whole idea creeped me out.

Think about human development and the slow methodical way that humans learn to understand the world. They spend the first three-to-six months literally on their backs looking up at the world, taking it all in, processing info at incredible rates, and building synapses like wildfire. The world is a three-dimensional place, and the brain needs vast amounts of time to synthesize all the information and stimuli. 2D flashy lights are not what the world is or should be, and taking away from the basics of depth perception can't be anything but deleterious for kids. Rather than playing with a cell phone or tablet, babies need to be staring at something like this: 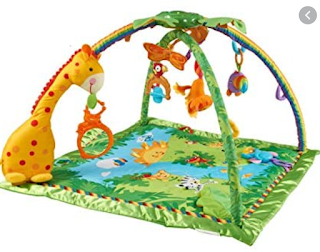 They should be playing with toys, not tech. And I worry that parenting choices made mostly out of convenience, distraction, and naivety are literally hurting their kids' brains. And they may be a root cause of learning disabilities.
Posted by mmazenko at 5:02 PM

Thanks for sharing such an informative article. I always wonder what will happen to the educational future of 3rd world countries where there is majorly not the scientific education system is adopted. So, learning disabilities in such areas are at their peaks. As if I quote from George Bernard Shaw, "The only time my education was interrupted was when I was in school." So that's' the case.