In Parasite, Both Families are Dysfunctional

Over Thanksgiving Week, we re-watched last year's best film, Bong Joon-ho's absurdist tragi-comedy Parasite, and that led to some pretty deep dinner discussion about our perceptions of the two Korean families and about BJH's thematic intentions. Our family was split on both those issues, with my wife and daughter viewing the Kim's quite negatively while my son and I argued that the Park family is equally flawed, if not more so.

Taking from the title and the entire point of the film: both families are parasites.

It's all too easy to blame the lower class Kims for their crass behavior in using and exploiting the incredibly gullible and uber-wealthy Parks. That's not the point -- the social stratification of Korean society, which is brilliantly portrayed by the high-low living arrangements, is the target of the dark satire and criticism. Yes, the Kims are basically criminals and con artists, exploiting every opportunity from stealing the wi-fi of their upstairs neighbors to conning their way into jobs for the full family in the Park's upper-class world. And their inability to restrain themselves in any way to simply hold down what may be seen as "good jobs they should be thankful for" is terribly sad. Even more tragic is how their choices ultimately lead to the death of their oldest daughter and the virtual imprisonment of the father. They are not completely sympathetic characters -- though, it's worth noting they are the protagonists and clearly set up as anti-heroes. We are not looking for them to fail and lose their jobs. And we can't look away from their incredibly clever but ultimately deceptive and amoral abuse of their opportunities.

And, of course, it's all too easy to see the Parks as simple innocent victims of the Kims' criminality, culminating in the bloody and senseless murder of Mr. Park by the psychotic husband of the former housekeeper who was shamelessly pushed out of her job by the Kims. Yet the Parks are equally morally bankrupt, symbolic of a careless oligarchy which is shamelessly aloof to the pathetic conditions of the working class. Mrs. Park is certainly the "beautiful little fool" that Daisy Buchanan hoped to raise, though her quickly contemptuous judgment of others is not at all flattering. And it's laughable how she falsely claims to value relationships and trusting people she knows when the Kims are able to so quickly win her trust and manipulate her choices. The Parks are basically a Korean version of Fitzgerald's Tom and Daisy Buchanan. Their shallow, self-absorbed egotism and insensitivity are nowhere more blatant than the decision to host a truly ostentatious and completely unnecessary birthday party for their son on the day after a massive rainstorm has left the Kims and thousands of Seoul's most vulnerable homeless, living in a makeshift shelter in a high school gym.

The Kims are tragic figures not only for their poverty and vulnerable status in life, but also because their quick wits and talents of chicanery are wasted by their limited opportunities and their natural inclination to simply pursue short term gains. They are all incredibly smart and talented in some areas, for their guile is truly an admirable business skill. Yet Korean society will never allow them to rise, as evidenced by how the son will never get into a university, despite being as smart and knowledgeable as his friend, and his sister will never use her skills in art, design, and even psychology for anything other than the next con. How sad that her parents can only wonder at how "she'd make a great con artist." Viewers would be naive to try and project educated, upper-middle class "virtues," inclinations, and choices onto people who have not had the benefits and supports to cultivate such prudence. The Kims are, of course, going to simply ride this job opportunity for as long as possible, milking every possible perk, even to the point of excessively drinking the Park's expensive whiskies, because they may never get this chance again, and life has taught them to seize what they can in the moment. That's the lesson of the streets; that's the necessity and survival instinct of people who must scam to get by.

The Parks are by contrast so flawed in their emotional intelligence and basic skills of decision making that viewers have to question and ultimately conclude their status in life can only be seen as a perk of privilege that they were obviously born into. Mrs. Park is a neurotic mess of insecurity, even as she seeks to project the other, and she is a complete failure as a parent, though that would seem to be her only role and responsibility. And Mr. Park is very clear in his rigid adherence to social rules established by birth and career status, noting how he just can't accept people who "cross the lines." The Kims and all the working class people had better know their place, and he is quick to make clear how expendable they are. His attitude toward his previous driver and Mr. Kim expose just how dismissive he is toward people in his employ, even as he pretends to care about them as human beings. His disdainful behavior is nowhere more clear than in the moments before his death when he chats with Mr. Kim about the plan to surprise his son, but then feels the need to passively threaten Mr. Kim with his job for appearing disinterested in playing such games. He is a driver, not a personal servant for the amusement of the Park family, and he is working on his day off, following the complete destruction of his home in the storm. This is to say nothing of Mr. Park hysterically screaming at Kim to come drive his family to safety as Kim's daughter lay there dying. It's the height of tragic absurdity.

Bong Joon-ho crafted a scathingly brilliant jeuvenalian satire of disparities in Korean socio-economic stratification, and his filming of the discrepancies exposes just how far apart yet eerily close these two families are. For even deeper analysis of this dichotomy, check out this explication of the film by writer Chadwick Jenkins for Pop Matters:  Bong Joon-ho's Parasite & the Geometry of Suffering. 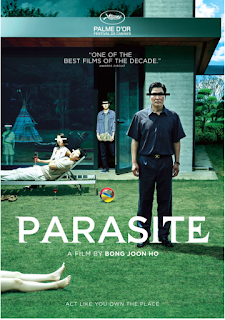