Dolly Parton - Comin' by it natural

Sarah Smarsh didn't set out to write a book about Dolly Parton or about the socio-cultural significance of country music, but that's exactly what happened when in the midst of the 2016-17 political season, she was researching and writing a lot commentary about the white working class and the complicated nature of Red State politics, conservatism, and the Republican Party. Those topics are easily over-generalized, and a deeper understanding of them is the focus of Smarsh's first book, Heartland; a Memoir of Working Hard & Being Broke in the Richest Country on Earth. That book was along the same vein as another white working class memoir, J.D. Vances' Hillbilly Elegy, which was recently turned into a film.

The Dolly Parton angle came to Smarsh when she learned of a fellowship offer from the music magazine No Depression to research and write about "the sociocultural significance of a roots music genre." The result of her work is She Come by it Natural: Dolly Parton & the Women Who Lived Her Songs. I'm looking forward to reading this for numerous reasons, not the least of which is that I, like Marsh, have been feeling recently that "country music is rarely given consideration as a sophisticated art form." In fact, I have been considering some similar research of the beautiful nature of storytelling and the narrative art of country music.

My interest has been sparked, and my connection to country music has been inspired by the recent arrival of a new country station in Denver, 106.7 The Bull.

* Thanks to John Williams of the New York Times for his profile. 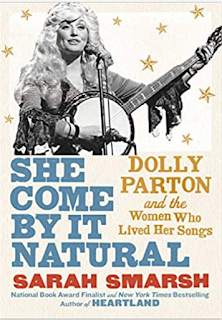