So, I am just continually disappointed by Fox News commentator Tucker Carlson, and that's a real shame because I honestly thought he had a lot of potential to generate authentic discussion and debate. Tucker is a smart, clever, well-educated guy who has a loyal audience and a broad platform for socio-political discussion. Yet, just as Jon Stewart admonished him for on CNN's Crossfire in 2004, Tucker Carlson simply uses his show to mislead and enflame his viewers and ultimately just hurt America. After all these years to grow into a thoughtful and reasoned conservative voice, Tucker instead just collects his lavish salary by obfuscating issues, stifling reasoned discussion, and increasing animosity and division. That hurts us all.

And it doesn't have to be that way. But it will until Carlson finally grows up.

Case in point is his monologue and show opener from last week during which he appeared to criticize "crony capitalism" and decry the deceitful, if not corrupt, corporate practices that have reaped record profits during the pandemic and financial crisis. Specifically, Carlson took aim at companies like Amazon, Google, Netflix, Goldman Sachs, & Walmart for profiting off a financial meltdown while working class Americans struggle, facing low wages and lost jobs, and small businesses fail to keep up. It was a rather populist message (to draw on Bill O'Reilly's traditional misappropriation of that term) that would seem to put Carlson at squarely at odds with the Republican Party, the Trump White House, the Tax Cuts & Jobs Act of 2017, free market conservatives, his own views from the early 2000s, and his time with the Daily Caller.

Carlson sternly calls out the excesses of these corporations and their lobbyists, noting "these people are a disaster for capitalism" as we all know the "rich are getting richer, and the poor poorer." Yet, he then deftly shifts blame for the privileged power those entities have to the Democrats and Progressives, and calls up the looming spectre of socialism to distract viewers from the root causes of the problem and instead promote even greater support for the GOP platform and Republican fiscal policies that ensure the current disparity he claims to oppose will continue. He even pretends to call for a "one-time Covid fee" (or tax) applied to their profits, which could then be redistributed to American workers and small businesses in need of a bail out. As if. Tucker Carlson acts as if he truly wants the federal government to tax one company's profits and give them to others. A few questions:

Tucker further clouds the issue and misdirects his viewers by attacking his most recent favorite target, Rep. Alex Ocasio-Cortez. AOC is the type of legislator who would actually support and pass his Covid fee, and he would subsequently rail against her socialist agenda. That's obvious. But more troubling is the seething hypocrisy in his attacks on the young Congresswoman. For he urges his viewers to "laugh at" AOC because she is a "vacuous idiot." That sort of insult is embarrassing at the minimum. But to worsen the obfuscation, Carlson disparages AOC as "a rich girl narcissist." Let's clarify:

My head is truly spinning from the manipulation and misdirection. To be honest, Tucker Carlson's nightly rants and pseudo-discussions of politics are truly just sad. Far from being a reasoned political analyst who is legitimately interested in debate, Carlson is simply nothing but a shock jock who is preaching to the choir ideas he doesn't even truly understand or actually believe just to make money.

And, I want to be clear: I am not a supporter of AOC in terms of her political views or legislative agenda. In fact, almost like one of her fellow freshman Congressman Rep Tim Burchett  of Tennessee, who counts her as a friend, "I don't agree with a doggone thing she says." And I also believe that it's not just Carlson who is "hurting America" with his brand of infotainment. The entire news commentary genre is bad for the country, and it has been harming discourse and dividing communities since the early 2000s. Truly, I also believe that Don Lemon is hurting America in many of the same ways the Fox News commentators are. Thus, it's just disappointing. And I wish Tucker would realize, like Jon Stewart tried so earnestly to convince him years ago, that he could be helping. And he'd still be the successful TV personality he is. 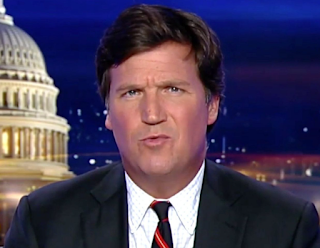 *Update:
Since I've posted, Tucker has spent three nights ranting about Jill Biden having an education doctorate.
I'm just shaking my head. Such a shame.
Posted by mmazenko at 8:50 AM